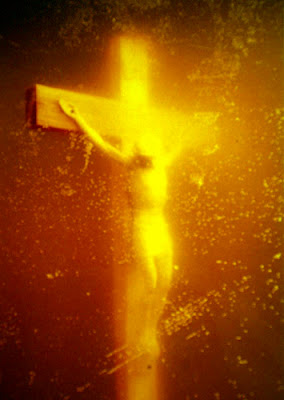 Here is something interesting - Glenn Beck either lied or just failed to read the details regarding a story he mentioned on his recently canceled Fox News program.  During his nightly broadcast, Glenn Beck claimed the controversial photograp called "Piss Christ," featuring a crucifix submerged in urine,  was attacked by anti- Christian activists targeting religious artwork.


A running theme of Glenn Beck's recently canceled Fox News show has been outrage over the supposed lack of attention paid to persecution of Christians at home and abroad. He hit on that theme last night, asking us if we'd heard that "four people from an anti-Christian group attacked two pieces of religious artwork in France" on Palm Sunday...

The defacement of art is a horrible thing and the offending parties should be punished to the extent that French law allows. However, the vandals are reportedly Christian fundamentalists, not "anti-Christian" activists, as Beck claimed.

Glenn Beck tried to make it look like Christians were being persecuted abroad when in reality, it was Christians who acted out.  Right-wingers like Beck would want you to believe only Muslims engage in violent actions against "blasphemous" artwork, but it appears Christianity has it's extremists too.

No wonder his program was canceled...
Posted by Kevin at 5:21 PM