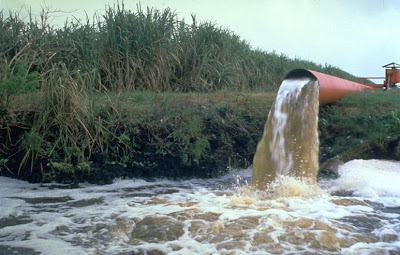 What a shocker.  On Earth Day, Rick Scott has sent a petition to the Environmental Protection Agency asking the federal government to rescind its water pollution guidelines for the state.

Janet Zink wrote the following for The Miami Herald:


The day after the Florida House passed a bill to ban implementation of water quality standards set by the U.S. Environmental Protection Administration, Gov. Rick Scott on Friday asked the agency to rescind a January 2009 determination that the federal rules are necessary for Florida.

Opponents of the federal requirement say the state is better equipped to decide how best to comply with the federal Clean Water Act, which is intended to manage nitrogen and phosphorous pollution of lakes, rivers, streams and bays. They say the EPA standards will be costly to implement, don’t address specific conditions of local waterways and provide little biological benefit.

“Florida is one of the few states that has a comprehensive program in place to address excess nutrients, and we continue to lead the nation in developing innovative tools to ensure the health of our state’s waterways,” Scott said in a prepared statement. “I look forward to working with the EPA to reach an agreement that will promote clean water standards in the way that makes the most sense for our state.”

The U.S. EPA released pollution standards for Florida waterways in December 2010 as part of a 2009 legal settlement with environmental groups, including the Sierra Club, who sued the agency for not enforcing the Clean Water Act in Florida.

The EPA told all states in 1998 to set limits on nitrogen and phosphorous pollution, and warned it would do it for them if no action was taken by 2004. But 2004 passed with no action. Hence the lawsuit.

So lets see - Rick Scott claims Florida can take care of its waterways and doesn't need the regulations that were brought upon the state because Florida didn't take care of its waterways.  Scott and opponents claim the "EPA standards will be costly to implement, don’t address specific conditions of local waterways and provide little biological benefit," but according to environmentalists, the Clean Water Act has had a positive impact on the state, which is still in desperate need of improvement.  The argument against federal intervention does not make sense. being that EPA Regional Administrator Gwen Keyes-Fleming stated the regulations would be common-sense, flexible, and site-specific - not the blanket coverage opponents make it sound to be.


What is even more troubling is that in the Florida legislature, Republicans (and twelve Democrats) voted to ignore EPA regulations.  Ignoring EPA regulations is what caused Florida to lose the lawsuit regarding the Clean Water Act in the first place.  Also, why would anyone trust Rick Scott over environmental issues when he proposed extensive cuts to restoring the Everglades.  The funding, once $200 million annually under Governor Jeb Bush, would be cut to a meager $17 million, and who knows where it would go from there.


If you really want to know where these policy suggestions are coming from, don't look to the people of Florida.  Instead, look for the representative of some business interest standing beside Rick Scott whispering in his ear... 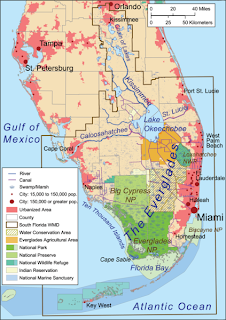 Oh and here is a thought - people like Scott insist the EPA is overstepping bounderies, but they fail to acknowledge that the Everglades is a National Park and is designated a World Heritage Site, International Biosphere Reserve, and Wetland of International Importance.  Not only that, but the wetlands extand as far north as Orlando - halfway up the state.  To ignore an ecological system that encompasses such a large portion of the state because of fears that it will hurt citrus growers and industry is irresponsible, and considering Florida's number one industry is tourism, one would think clean waterways would be a boon for business interests.
Posted by Kevin at 2:30 PM