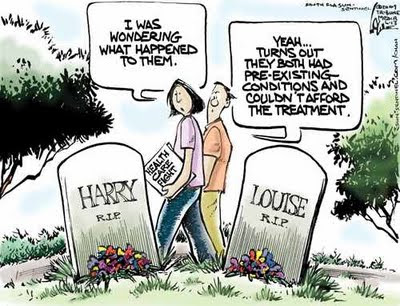 The day of reckoning is soon approaching for health care reform as the Supreme Court prepares to release their opinion on the constitutionality on all or part of the administration's signature law and with an election to boot, Republicans are being very cautious in how to approach the situation.

If the law is upheld and they are strongly opposing the law, they will surely be dealt a political blow and their candidate, Mitt Romney, would surely suffer at the polls.

If the law is struck down in its entirety, they could toot their horns and claim they are the true defenders of the constitution, but then what's next?

If only part of the law is struck down, in particular the individual mandate, do they praise the parts of the law that are popular in a desperate attempt to score some additional political points?

Not only that but not all Republicans are on the same page.  Remember those ultra-conservatives that were elected in 2010?  They may not like the idea of their party backing something the spent a few years branding as "socialism," "communism," or any other anti-American "ism."  Such conflicts have recently come to light when Politico obtained an email chain full of conservative activists, Republican leadership and healthcare policy staffers, and think tank insiders called The Repeal Coalition.

Is this the liberal answer to the conservative nontroversy surrounding the Google Group JournoList founded by Ezra Klein?

Republicans can't quite decide whether they want to do anything at all.  What ever happened to all those alternative plans the Democrats supposedly ignored during the health care debate?

“Should we change the name of this [listserv] to ‘partialrepealcoalition’ or ‘someofobamacareisprettygood’?” Denton wrote to the group.

Brian Worth, a GOP leadership staffer responsible for coordinating with outside groups, shot back that “the House has already passed a full repeal bill.”

“Has the Senate passed that bill yet?” Worth asked Denton, in the email chain.

Russ Vought, a former House Republican staffer who is now at Heritage Action for America, bluntly said, “that has absolutely nothing to do with it.” The “House GOP is going to cave after winning an election on full repeal … and before winning the next election to finish the job.”

The common Washington narrative holds that Boehner, Majority Leader Eric Cantor (R-Va.) and Majority Whip Kevin McCarthy (R-Calif.) have trouble wrangling the members in the House Republican Conference. That might be true — at times.

This list may just be nothing.  We pretty much expect the GOP to cave to the conservative wing of the party, but considering it is an election year and considering the fate of health care reform is hanging by a thread, Democrats could have a way to stick it to Republicans and beat them to the punch.

Congressional Democrats could start proposing legislation identical to the popular parts of health care reform in hopes that Republicans, in their ever so obstructionist ways, oppose those very provisions they (and the rest of America) like.  Democrats will also get a contingency plan in place in case the entire law is repealed.  Not only that, but if only the mandate is struck down Republicans can then either support the Democratic proposals and try to find funding (most likely through unpopular cuts) or advocate repeal - both of which would prove unpopular with a majority of voters.