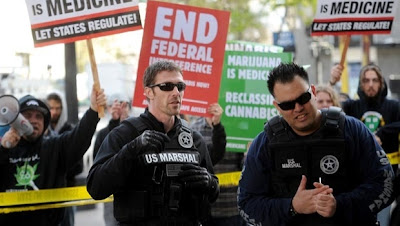 Republicans are all for states rights.  Just ask any one of them and they would cry about the overreaching federal government.  Recently a bill came up in the House that would defund the raids on medical marijuana dispensaries by federal agents.  Remember what Mitt Romney told a Colorado reporter recently: "I'm not running on marriage and marijuana, those are state issues, right? Aren't they?" he said following the interview."