Unlike her Fox News coworkers, Sarah Palin decided to not atend the White House Correspondents' Dinner, instead opting for a pro-life fundraiser for anti-abortion advertising group Heroic Media.  Of course, the event was closed to the press, but Politico had purchased tickets to the event.  Jedd Rosche wrote the following:


Palin praised Heroic Media's advertising against abortion, on billboards, online and in social media. She also presented an award to Lila Rose, the videographer and activist who did a video sting operation against Planned Parenthood and worked with James O'Keefe on his sting against ACORN.

"Planned Parenthood doesn't empower women, or offer women who find themselves in less than ideal circumstances any kind of real choice," she said. "What they offer is not real choice or female health care."


Palin's daughter Bristol was also in the Washington area, but she attended Saturday's dinner with the president and the Beltway media instead. Palin said she advised her daughter to just grin and bear any Palin-related jokes.

"Go and grit your teeth if you hear Palin jokes out there on the podium," she said.

Here is something Palin could understand: a pie chart depicting Planned Parenthood's services. 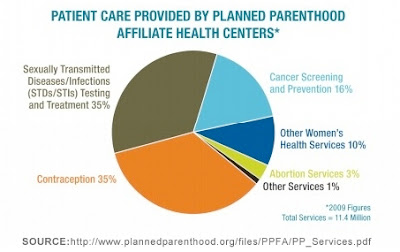 By stating Planned Parenthood does nothing to empower women is a huge falsehood.  It helps prevent the spread of sexually transmitted diseases, cancer, and unwanted pregnancies.  I guess Palin would love to see pregnant cancer-ridden women.  What does Palin believe would happen should Planned Parenthood dissappear?

There would be a rise in diseases, cancer diagnoses, unwanted pregnancies, as well as a handful of other issues that effect women, and where do you think the cost would fall then?

Instead of facing the truth, Palin decided to go to a closed speaking event to speak to those who idol her.  It's only a matter of time before Donald Trump announces Palin as his running mate.
Posted by Kevin at 10:59 AM