It seems conservatives are constantly looking for something to complain about in regards to the Democrats, the president, and the administration, and it appears they have found their newest weekly - rapper Common appearing at a White House poetry reading.  Apparently, Common supports cop-killing, as mentioned by numerous right-wing pundits, but as usual, those idiots get it all wrong.

The Daily Show did a great service in highlighting the right's hypocrisy by pointing out Fox News' embrace of musicians with far more violent lyrics, such as Johnny Cash's "Folsom Prison Blues," which is about a man who "shot a man in Reno just to watch him die," or Cash's other song "Cocaine Blues," which tells the tale of Willy Lee, a man who is sentenced to prison for shooting his "bad bitch down" in a whiskey and cocaine fueled rage; Ted Nugent, who had once told President Obama "to suck on my machine gun;" and Ice T, who is well known for his 1992 song "Cop Killer."  Fox News had also praised Common's lyrics, in which a reporter had called the rapper "very positive."

What I found particularly funny was not the right's hypocrisy (which Media Matters did an excellent job pointing out), but Sarah Palin's stupidity that just added to the ridiculousness of this entire non-issue.  Palin took to the sponsors of her unofficial presidential campaign - Fox News - to criticize the pick of Common to do a poetry reading but she took it a bit further.

"The White House's judgment on inviting someone who would glorify cop killing during Police Memorial Week, of all times, you know, the judgment, it's just so lacking of class and decency," said Palin.

There is only one problem with that - National Police Week is officially from May 15th through the 21st. 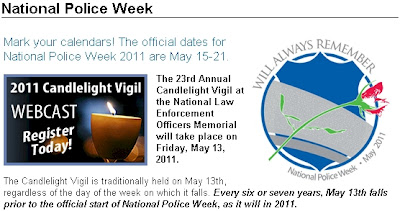 The poetry event was on May 11th.

Maybe Palin should spend a little more time Googling her talking points before she open's her trap on her favorite "journalist's" program.
Posted by Kevin at 10:52 AM