Why Obama Should Not Have Pushed Back Jobs Speech

President Obama, always looking to be the bigger man, agreed to postpone his jobs speech by one day due to the cries of congressional Republicans.

In my opinion, the president should not have delayed his speech and should have let Republicans throw their tantrum and skip out on the important event.

Because now that Obama conceded to Republicans yet again these are the kinds of headlines we will see from the right-wing media: 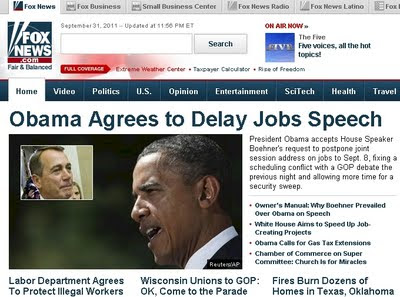 Conservatives will undoubtedly push a narrative that the president is disinterested in job creation and is willing to delay speaking on such an important issue.  Want to bet they will complain whatever the president does on September 7th as being less important then the now-delayed jobs speech?
Posted by Kevin at 2:59 AM