It didn't take long for Sarah Palin and her camp to weigh in on the controversies stated in the Joe McGinniss book.  While Palin herself has not come out to denounce the book, people close to her have already attacked the book.  For instance, Palin's husband, Todd, said the book contained "disgusting lies."

Now, Palin's lawyers are stepping into the game serving a notice of possible litigation - not an actual lawsuit - and the letter from Palin's lawyers to the publisher of McGinniss' book, Crown Publishing, a division of Random House, is full of the kind of ridiculous nonsense expected of Palin.

The note, written by John Tiemessen, reads as follows:


Enclosed is an e-mail by your author Joe McGinniss. In this e-mail, Mr. McGinniss admits that your own lawyers instructed him that “nothing I can cite other than my own reporting rises above the level of tawdry gossip.”….Indeed, Mr. McGinniss admits that the allegations are false unless he can find someone or something to show they are true. We know from the final book that he was unable to do so.

It is malicious for your company to publish a book wherein it, and the author, admit that they were fully aware the statements in the book were false, intended to be false, and were intended to harm…

Accordingly, since both your company, and the author, clearly knew the statements were false, admitted they had no basis in fact or reality, but decided to publish in order to harm Governor Palin’s family, you and Mr. McGinniss have defamed the Palins. This letter shall serve as written notice under AS.09.30.070 (b) that a claim may be brought against you, your company and Mr. McGinniss for knowingly publishing false statements.

In the interim, please take note of the following: It is unlawful to delete emails or destroy records upon being notified of the need of business records for litigation purposes. In addition, courts may impose civil sanctions against a defendant that destroys emails and other documentation. Please immediately provide notice to your employees to save and back up all records pertaining to the Palins and the book “The Rogue." Further, as Mr. McGinniss waived the attorney client privilege and disclosed to third parties what "Random House lawyers" told him (he needed sources and the book was not publishable without them), we will also be entitled to review your company's legal correspondence with Mr. McGinniss and his responses thereto.

Please do not hesitate to call if you have any questions or concerns or if you wish to resolve this dispute.

What is interesting about this note?  Everything.

Secondly, it is funny to think that Tiemessen actually believes that one disclosed email where McGinniss references "Random House lawyers" somehow waives McGinniss' entire attorney client privileges.  Referencing communication to your lawyer does not somehow entitle an opposing party to view your correspondences.

I guess that since Tiemessen released this letter stating the information in McGinniss' book is false, he must have had communication with Sarah Palin proving the book contains false and malicious information and therefore Joe McGinniss is entitled to see the evidence Palin and her lawyer have and all correspondences regarding such issues.

The last sentence is also laugh-worthy.  Tiemessen actually had the nerve to put in his little note that Crown Publishing should not hesitate if they wish to resolve this dispute.

What is funny about that last line is that there would be only one way to solve this situation should Tiemessen's claims were to be true and that would be to sue Crown Publishing and demand the book be pulled from the shelves but instead Tiemessen only raises the specter of litigation and tries to gain access to McGinniss' confidential information.

It appears that Palin's team is trying to find out any weak links in McGinniss' chain so that they can exploit them for a Palin victory.  If Palin had proof that McGinniss was presenting false information in his book, Palin could simply come forth with evidence of the truth and easily win a case against the publishers.  For instance, McGinniss raises some interesting questions regarding the birth of Palin's son Trig.  Palin could easily release Trig's birth certificate and her medical records to dispel what Tiemessen calls "false statements."

It is highly unlikely that Palin will pursue a legal course of action because doing so would require Palin to be deposed, and since we all know Palin to be a habitual liar, a deposition would but the former half-term governor of Alaska at risk of perjury.

Update - It seems my comments have struck a chord with some of the folks at Big Government.  See their flaming comments below: 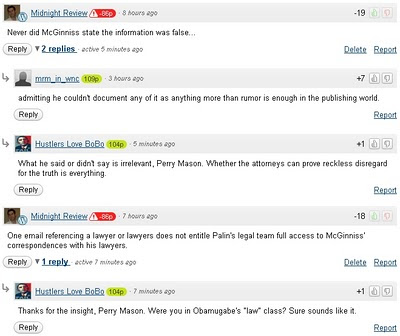 Notice how one commenter, Hustlers Love BoBo, chose his name to insult other commenter (and Midnight Review regular) HuskersLoveBo?

Also notice how even presenting a logical statement, such as one email does not throw away McGinniss' attorney client privilege, is confronted with insults and zero facts supporting why they believe Palin's lawyer to be in the right.

I won't hold my breath waiting for Big Government to delete these flaming comments and reign in their violent fans.

Update - While waiting for that last comment to be deleted this new nugget of hate was directed my way from a commenter by the name of IronHawk86:

I shouldn't feel special - check out IronHawk86's other recent comments: 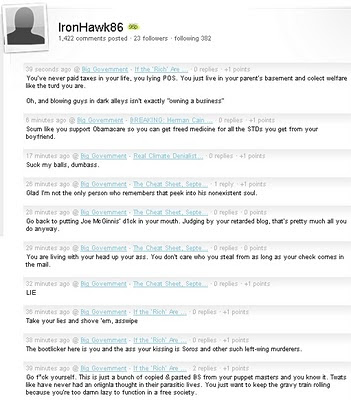 Sounds like IronHawk86 is a really mature individual.  Seems like his insults on Big Government aren't a real stretch - he loves to call people "shitstain," "asslicker," and "cocksucker" on other sites, too.

Based on his comments, IronHawk86 is either just a stupid and ignorant pawn influenced by right-wing media or he is a sheltered 25-year-old rich boy who doesn't want daddy taxed so he can inherit it all.
Posted by Kevin at 4:37 AM