Definite Deficit For The Fiscal Year... 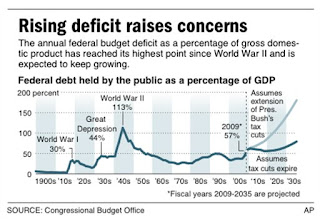 The United States' fiscal year just ended with a record breaking deficit of $1.4 trillion, with $190 billion going towards interest on Treasury securities to fund the federal debt.  Granted this amount is less than what the White House had forecasted a couple months ago, seeing the final price tag is alarming, much like seeing your final car payment and realizing you paid much more than the sticker price because of installment payments.

While many on the right will rally around these high numbers, Democrats must not sweep this under the rug, like they do with many other headlines.  If you consider this deficit includes the massive stimulus bills, including the $150 billion Bush stimulus and the $787 billion Obama stimulus, the total of the deficit would be closer to $437 billion, but the real issue would be the impact on this years budget on future budgets.

Ross Perot warned of the national debt back in 1992, and although he brought attention to the matter, it quickly fell on the back burner due to the prosperity of the Clinton years, but now I believe it is time to heed Perot's words, as I did when I was younger.  "Washington has to learn the first rule of holes. When you're in a hole, the first thing you do is stop digging. It hasn't learned that yet," Perot had stated before, and I hope that Washington looks closely at government spending.  Democrats must not shrug this off, simply because it was slightly lower then expected, and Republicans must not look at this as a political opportunity to make headway; by doing so, they will only delay any real reform.  Both parties must make concessions, with a focus on responsibility, both individual and national, in order to preserve economic well-being.

Although an unpopular view, I believe that the government should practice fiscal responsibility in the strictest sense, working to make all government operations as efficient as possible, with a tax increase on all Americans to elliminate the national debt.  Although this is very unrealistic, for no politician would ever propose raising taxes across the board, regardless if it were to elliminate the debt, it is only then that America be able to flourish as it once had.
Posted by Kevin at 2:35 AM