I have heard numerous stories regarding the organization known ass ACORN, ranging from voter fraud to supporting child prostitution rings.  Is there any substance to these stories?  Sort of.  While there have been voter registration anomalies regarding forms submitted by ACORN, they constitute a small percentage.  Recently, I was told by a friend that ACORN had registered zero Republicans.  While I found that to be statistically improbable, considering they had registered over one million voters from 2007 through 2008, although I would believe it to be true that a majority of those registrations returned were Democrat.

My friend's question had me wonder something else.  Given the large amount of voters ACORN registered, and assuming that 100% of them registered and voted for Barack Obama, were there enough of these new voters to sway the election.  Although Obama won by nearly 8 million votes, we must take into consideration that this is not a popular vote.  If ACORN's registered voters were enough to make a difference in a handful of states, McCain may have gotten more electoral votes.  Requiring 270 to win, Obama received 365 to McCain's 173.  Were there enough voters in enough states to possibly help Obama win?

Here is a map depicting the states in which ACORN had registration drives, along with the number of registered voters for each state: 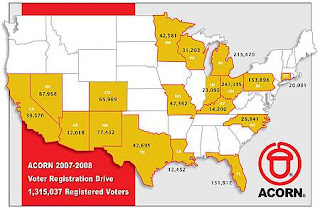 Here are the margins of victory for the states ACORN held drives in that Obama led in the election:


Even if you were to elliminate all of the ACORN voters, Obama still would have won these states.  It is safe to say that regardless of ACORN's efforts, Obama would have won, but the real question is would Democrats be able to maintain these voters for the 2010 election?  If the conservatives continue to attack ACORN in a negative frame, and associate Democrats along with them, the Republicans may make some additional gains...
Posted by Kevin at 12:05 PM