Jan Brewer Acts Tough For Base 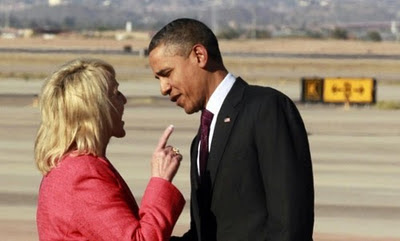 It is now all over the web - Jan Brewer stood tough in the face of the president and showed him who's boss.  Brewer even hit the airwaves after the encounter to insult the president some more, calling him "thin skinned," but is that really the truth?

The president does not seem to think so.

"I think it's always good publicity for a Republican if they're in an argument with me. ... But this was really not a big deal," Obama said. "Last time we met, she wasn't fully satisfied. But, you know, I think this is a classic example of things getting blown out of proportion."

The president is one hundred percent right and I will point to another famous (and recent) example where things went the other way, and a popular Republican governor embraced the president - Charlie Crist.

John Dickerson wrote the following for Slate regarding both the Crist-Obama hug and more:


Crist's downfall in the Republican Party is often clocked from the moment he hugged President Obama in February 2009 . Obama, in the early stages of his attempt to reach out to the other party, praised Crist's support of his stimulus spending during a Florida visit, and the governor praised right back. The hug alone wasn't where Crist's transgressions began or ended, of course. But it became a powerful symbol that opponents within the Republican Party used against him. (His opponent launched a Web fundraising page with the picture and a caption that read "Get the picture?")

The public presidential hug has a mysterious power. Once upon a time it worked mostly for good. Civilians who get one beam like they've been drinking. At party fundraisers, it's proof that the senator or representative is thisclose to the most powerful man in the world. In town-hall meetings, it can show the president cares—whether it's Barack Obama comforting a woman who can't get health care coverage or George Bush comforting the daughter of a 9/11 victim . (The most famous presidential hug, between President Clinton and Monica Lewinsky , was a special case.)

But starting with Sen. Joe Lieberman , the hug became political poison. Democrats used his embrace of George W. Bush, and Bush's peck on the cheek, to help force the Connecticut senator out of the party in 2006. Democrats used John McCain 's hug with George Bush to show that his claims to being a maverick were hollow. (Now McCain won't even hug himself ). Hugging is so fraught with danger that even Sen. Tom Coburn , the Oklahoma Republican whose conservative bona fides are beyond question, received critical letters when he hugged Obama before the State of the Union in January.

Looks like Brewer just did not want to become another casualty of the political hug.

Also, is Brewer really sticking it to the president or is she looking like she is yelling at Obama because they happen to be standing on the loud tarmac?
Posted by Kevin at 1:24 PM