The hypocrisy from the right wing is just too funny sometimes. Most recently, Palin criticized Rahm Emanuel for using the word "retarded" while condoning Rush Limbaugh's use of the word, when describing a meeting at the Whitehouse with advocates and the handicapped a "retard summit," and while Palin was giving her speech to the teabaggers, she criticized Barack Obama as a "guy with a teleprompter" but during that same speech, it was revealed that she had written crib notes on her hand, but according to the talking heads on the right, when Palin uses a speech aid, its different. 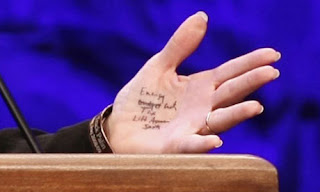 I have no issue with the use of teleprompters, and in fact, Sarah Palin had used them during the campaign, as well as after, along with everybody else, but she would probably wish everyone would forget about that and think of her as the conservative hero that she is not. The right have already attacked this non-issue, like Jim Hoft, from Gateway Pundit claiming the mainstream media is using this as a diversion from reporting on her brilliant speech and Fox & Friends co-hosts calling it "folksy" and "down to earth."

What is more worrisome, and Richard Adams points this out in his blog, is that "the hand-notes were for her points in reply to a question about the priorities for a Republican-controlled Congress, and I blogged previously that the third part of her answer was deeply disturbing: asking God for divine intervention." I presume this means that she would want God as vice president to cast any tie breaking votes.
Posted by Kevin at 4:53 PM