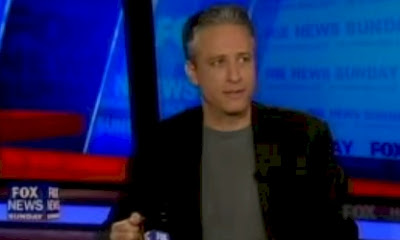 Recently, Jon Stewart appeared on Fox News Sunday with Chris Wallace, in which he discussed media bias. Wallace asserted that Fox News was indeed biased, reporting with a conservative slant on the news, and claimed the rest of the mainstream media (ABC, NBC, CBS, MSNBC, CNN, etc.), as well as Jon Stewart's comedy program, held a liberal bias.

As a side note, it was pretty interesting how Fox News edited out comments made by Stewart that seemed to disprove things that Chris Wallace had said, such as when Wallace insisted the network's employees do not receive "marching orders," Stewart pointed out leaked emails from Fox exec Bill Sammon that specifically tell on-air personalities what to say and how to say it (Fox did however put that clip online in the full less-viewed version).

Anyway, Big Journalism's Christine Rebecca (a.k.a. Christine Mathias, a supposed super-professional capitalist with "a string of letters behind her name," who gave it all away to become a soccer-mom/freelance writer) jumped to help out their right-wing propagandist buddies by writing how she believes Jon Stewart was wrong in saying the media was not biased. She also believes Stewart was wrong when he insisted he was a comedian first and that his show held a political agenda.


So in case you haven’t heard, Jon Stewart was on “Fox News Sunday” this weekend and he spent a lot of time asserting to Chris Wallace that his Comedy Central program, “The Daily Show” doesn’t have a political agenda. He claimed that he has no desire to be a player in politics and that his show isn’t political commentary … it’s just comedy “informed by an ideological background.”

While walking that fine line, Stewart also insisted that the MSM isn’t politically biased, they just trend toward “sensationalism and laziness.” Inherent in that statement is the belief that one couldn’t be sensationalistic, lazy, and biased. Thing is, bullies often are lazy, sensationalistic, and biased … it’s the nature of the beast. But I digress.

Hmmmm. After the death of Walter Cronkite, a Time poll showed that Stewart was to inherit Cronkite’s coveted title of “America’s Most Trusted Newscaster.” For the record, 44% of respondents named Stewart, 29% Brian Williams, 19% Charlie Gibson, and Katie Couric raked in 7% large.

Seems his viewers, and for that matter Time readers, haven’t received the message that he’s just a comedian. How’s that for consistently misinformed viewership?

So basically, Mathias Rebecca believes Stewart is wrong because more people trust him.  Looking at the names Rebecca lists, I can't help but notice not one of them are from Fox.  Brian Williams is from NBC, Charlie Gibson ABC, and Katie Couric CBS.  Stewart, who people trust the most, comes from Comedy Central.  This would fall in line with what Stewart was saying on Wallaces program - the consistently most misinformed media viewers are Fox viewers.  Fox likes to ignore little things like how many people trust them, though.

Media Matters had just pointed out that Fox News has been touting outdated polls stating Fox "is the most trusted television news source in the country."


It's true that in January 2010 -- a year-and-a-half ago -- Public Policy Polling released a survey saying that respondents trusted Fox News more than any other outlet the pollster asked about. In that poll, 49 percent of respondents said they trusted Fox News, compared to 37 percent who distrusted it.

But that doesn't mean Fox is still the most trusted news outlet. "They are touting the 2010 version of that poll when the 2011 version of the poll came out differently," says Tom Jensen, the director of PPP.

Indeed, PPP published a new installment of the poll in January 2011 -- with very different results. This time, PPP found that PBS -- which wasn't included in the 2010 poll -- was by far the most trusted outlet. Fifty percent of respondents said they trust PBS, while only 30 percent said they distrust PBS. Meanwhile, trust in Fox dropped to 42 percent, while distrust of Fox increased to 46 percent.

Now considering Fox News touts the old PPP poll, then it would seem Fox must also agree that PBS - the target of many negative stories on Fox - is trusted more then their own network.

So let me get this straight - More people trust PBS over Fox and Fox doesn't have any trusted news anchors.  How would Rebecca explain that?

Her whole argument against Stewart is that people are misinformed for trusting Stewart is because he is a comedian (Stewart actually said he was a comedian first in his Wallace interview), but how is it that comedians like Stewart shouldn't be trusted.  If Rebecca ever watched Stewart's show, she would notice that he takes shots at everyone, including Democrats, the president and pundits from the other mainstream media outlets, but one of Stewart's constant themes in his bits is juxtaposing comments made by politicians, and yes, employees of Fox News, against comments made by those very same people highlighting the hypocrisy.

Does it make good comedy?  Yes.

So why again do people trust Stewart more than Rebecca's Fox News idols?  Perhaps it is because Stewart points out how those people consistently lie to their viewership.

Here is a tip for Christine Mathias - if she wants to be trusted as a writer, which she claims she gave it all up to become, then she should probably drop the cartoon avatar, the stupid alias, and leave the right-wing joke of a website she writes for.  Maybe then people would take her seriously.
Posted by Kevin at 12:00 PM