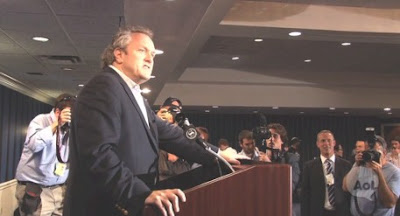 Sadly, it has been revealed that New York's Rep. Anthony Weiner had indeed sent lewd photographs of himself on the internet.  I am deeply disappointed in the representative, and while I wait for more developments in the story, I will still support Weiner as a legislator.  One major reason is because it is conservatives who claim moral superiority while leading hypocritical lives.

With that being said, I also want to express my concerns regarding Andrew Breitbart's involvement in this situation - I fear Breitbart will try to use this incident to vindicate everything he has done up to this point and beyond.  That leads to the headline of this post - did Andrew Breitbart extort Weiner?

Before Anthony Weiner took to the podium of his press conference, Breitbart hijacked the microphone and held his own press conference of sorts in which he said "I'm doing this to save his family, okay? And if this guy wants to start fighting with me again, I have this photo."

Breitbart had also gone on NBC's "Today" show and when asked directly if the photo was an insurance policy, Breitbart first responded that "I don't like to think that way," but then later called the photo "an insurance policy" should Weiner make future attacks against him.  Breitbart was also very reluctant to say he wouldn't use the photo of Weiner in any other instance as well, opening up the possibilities that he would use this photo as leverage against liberal websites, celebrities, and politicians.

According to Wikipedia, extortion "is a criminal offense which occurs when a person unlawfully obtains either money, property or services from a person(s), entity, or institution, through coercion."

Coercion "is the practice of forcing another party to behave in an involuntary manner (whether through action or inaction) by use of threats, rewards, or intimidation or some other form of pressure or force."

Breitbart wanted Weiner to act a certain way, threatening to release embarrassing photos of the congressman if he did otherwise.  That sounds like extortion to me.

It is interesting that during the "Today" show interview, Breitbart says that sending pictures like the one Weiner sent  could put someone in a "blackmail situation."

Breitbart also claimed in the interview that it only became "news" when the congressman claimed his computer was hacked (although more accurately it would have been his account on others' computers), but if that is the case, why did Big Government and Big Journalism continue to publish "Weinergate" stories, such as the one from Megan Broussard claiming she had talked to the congressman over the phone after meeting him on Facebook and discussed his sex life - she wrote that she was contacted and that prompted her to come forward - or what about Breitbart's own post a couple hours after the press conference, in which he promoted having a new woman come forward with pictures and communications?

If Breitbart felt vindicated that he was right about the underwear shot, why is he continuing to dig deeper into Weiner's personal life, especially while saying publicly he feels sorry for the guy and doesn't want to hurt his family?

I also thought it funny that since Weiner admitted sending the photo, right-wingers are jumping all over anything related to this story, like serial propagandist Jim Hoft, who found a joke-piece on Daily Kos claiming the press conference was a hoax - Hoft insists "leftist cranks" refuse to accept the truth.  He even dhows a screenshot of a poll on the site asking people if they believed the press conference was a hoax - you could vote either "Absolutely," "Of Course," "HR (for thinking otherwise)," "Canucks in 6," or "Bruins in 7."

Looks like Hoft is too dumb to realize a joke when it is staring him in the face.
Posted by Kevin at 1:46 AM