Scanning one of the conservative Meccas, such as Andrew Breitbart's Big Government, I had noticed an article that I thought sounded interesting. No, it was not Rush Limbaugh's health update, it was an article by author Liberty Chick (a.k.a. Mandy), titled "Hijacking the Private Sector, the SEIU and Blago Way". Intrigued, I clicked into her analysis of the economy and read away.

Liberty Chick, a self described blogger and activist, explains that the bail outs and subsequent stimulus were all about "Jobs. Jobs. Jobs," and points to a couple graphs that illustrates that while jobs are being created, they are not to be found in the private sector. The graphs that she uses as proof are between 2000 and 2008, during Bush's presidency, and illustrate the employment trend in both private and public sectors. While the graphs expressing employment trends both point up over the 8 year period, the graph illustrating union worker employment shows a different picture. It shows that unions have lost in the private sector between 2000 and 2006, but showing a small increase between 2006 and 2008. It also shows that union employment in the public sector had remained rather static, with only slight increases between 2006 and 2008 (again, during the previous administration).

While Liberty Chick blames the current administration for further bloating the economy, she points backwards for the source, and she points way back to when Democrats regained control of Congress during the mid term elections. According to her, the private sector "plummeted" in 2007, and that Democrats were playing catch up rewarding unions with public sector jobs. It is interesting because the graphs illustrate that while there were rises in both private and public sector jobs in the period prior to the Democratic resurgence, it also shows an equal rise in public and private sector union employment after the supposed Democratic kick back to unions. To single the public sector out while ignoring the private sector is selective journalism, and while the same can be said for what I am writing, I am simply offering a counterpoint, a companion piece, to Liberty Chick's slant on the economy.

Liberty Chick must not have learned about the ethical use of graphs in economics class. Looking at the private sector vs. public sector graph, one will notice an inconsistency. While the graph illustrating the private sector moves up incrementally by 2 million, the graph illustrating the public sector moves up in increments of 500,000, or 25% the measurements of the graph on the left. This trick makes the public sector appear to have a tremendous gain that puts the slowing rise, or "plummeting", of private sector employment to shame. In actuality, Liberty Chick is playing games with numbers and images to make a point. That is called propaganda.  Confused?  Take a look below: 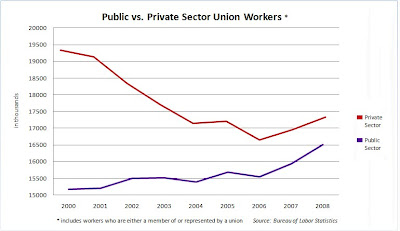 Update:
After receiving a response from Liberty Chick, I had decided to add a little graph myself, although I did not create this one.  Instead, I decided to tap the Bureau of Labor Statistics, the same place Liberty Chick got her information from.  The following graph depicts the union membership rate for both private and public sectors from 1983 to 2007.  The following graph was made by the Bureau and depicts the long term trend of private-sector union membership rates dropping and public-sector rates remaining relatively the same.  Although Liberty Chick's graphs may show a steep incline or a "plummet," to fully understand, it is better to look at the complete picture.  Union membership rates are nowhere near where they were and any short term change is by far no indication of dramatic increases or decreases.  If you look really hard, you may be able to see that sharp rise in private sector union membership! 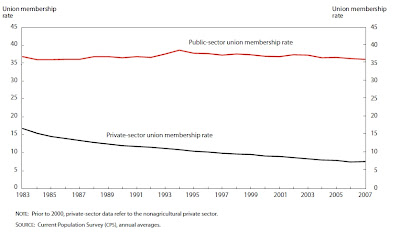