Conservative Media Is Like The Blind Leading The Blind 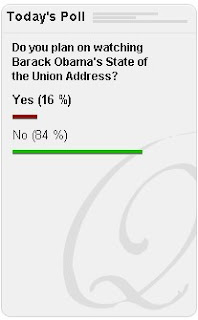 I decided to visit Townhall.com real quick before I head to bed when I noticed a poll on their website that asked if you, the answerer, planned on watching Barack Obama's State Of The Union Address. Of the responses, including mine, only 16% responded saying they planned on tuning in. A whopping 84% said they wont. I found this alarming because these people who said no are pretty much dependent on third party sources to tell them what was said, and not witness for themselves what actually was said. This explains much of the fervor you see at right-wing rallies, where ignorant masses scream about the injustices perpetrated by the Obama administration. When confronted, they have no clue what they believe because they are just echoing the opportunistic voices of the conservative propaganda machine. I may not have been the biggest fan of President Bush, and I disagreed with many of his policies, but I supported him as my president and I was eager to watch any public address he had made, so that I may draw my own conclusion, and if some else was elected president, other the Obama, that I disagreed with, and they were making an important address, I would be sure to tune in.

When I discuss politics with some conservative friends and coworkers of mine, they tell me that Democrats, not Republicans, are unwilling to listen to the opposing view and that Democrats are the reason Barack Obama has failed to achieve bipartisan success. While the Democrats have contributed slightly, it is clear that it is the obstructionist point of view from the right-wing that is gumming up the works.
Posted by Kevin at 2:57 AM