Are the Democrats Indoctinating Children? 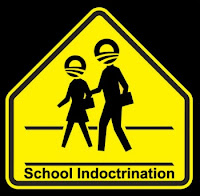 It seemed that over the past 8 years, conservatives have been creating a culture of ignorance.

They chided John Kerry in the 2004 elections for having an ivy league education, even though President Bush had one as well, and they have been increasingly supporting or promoting ideas against global warming and evolution, courting their base, which largely consists of the religious right.  They have also made numerous false accusations and claims about opposing policies, citing disreputable sources.  Now, most recently, some conservatives have come out against Obama speaking to school children on their first day of school, and in some instances making comments suggesting parents keep their child home to avoid indoctrination.

Indoctrination?  What's next, an attack on liberal arts programs at universities across America?  Will conservatives deride such programs as a continuation of the indoctrination process?  Will they call for "conservative arts programs"?  I imagine AmeriCorps will be sponsoring after school events.

Glenn Beck had said on his radio show "On Tuesday, the president is going to be speaking to classrooms and your children, if they go to school -- K through sixth grade, I believe. You know, hey, get 'em while they're young."  He is implying that Obama will be trying to steal your children away, converting them to a radical ideology.  Mark Finkelstein, a contributing editor for NewsBusters compared Obama to Chairman Mao.  The list goes on, and you can read more statements here.

Consider the past election, where 95% of the people who had voted for Obama had some sort of education including high school and beyond, breaking that down into smaller categories, consisting of people with high school diplomas, some college, and college degrees, more than 50% of each group voted for Obama, with the greatest difference existing among college graduates, with 53% voting for Obama while 45% voted for McCain, with that group consisting of 44% of all voters.

With the numbers closer in previous elections, and in some cases more favorable towards Republicans, I wonder if this is going to be a continuing trend?  Another thing to look at, which will probably support conservative theories of indoctrination, is the percentage of people aged 18-29 who had voted for Obama.  That group of people makes up 18% of the electorate and 66% of that group voted for Obama.  If these voters remain Democratic, then there is a good chance every subsequent demographic may change.  This does not mean Democrats will be successful.  A Democrat has not been capable of winning reelection since FDR.
Posted by Kevin at 10:47 AM