Visiting Media Matters for America, I thought there was an interesting article regarding the amount of times the subject of ACORN was mentioned regarding other scandals, such as the Jack Abramoff scandal or ones involving military contractors.  I thought it was interesting because you constantly hear from Glenn Beck and Sean Hannity that ACORN is corrupt and receiving so much federal money, and that must be stopped, but the article I read illustrates the point, that although ACORN has received only $53 million over the past 15 years, thsee other people and corporations are given a free pass by Beck and Hannity, even though they have taken in $25 Billion over the last 8 years; ACORN collects only .2% the amount of all these military contractors, yet they are constantly attacked by the commentators on Fox News. 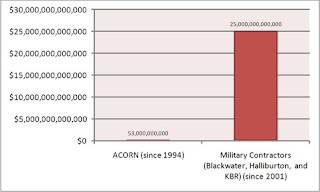 According to Media Matters, since May of 2006, Glenn Beck has referenced ACORN 1045, compared to only 7 times for the Abramoff scandal, 2 times for the Blackwater scandal, and 19 times for the Halliburton scandal.  Comparatively, on Sean Hannity, these same subjects have been discussed 457, 55, 2, and 24 respectively.  The following graphs can be found in this Media Matters article.

Considering the amount of taxpayer's money involved, you would think such advocates for the average citizen, such as Glenn Beck or Sean Hannity, would make a bigger deal about companies that are receiving federal money that are involved in murdering innocent civilizans, instead of a community organization that received a fraction of a fraction of the amount, in more then twice the amount of time.