The XO Laptop and New Mini Laptops... Will They Stick Around? 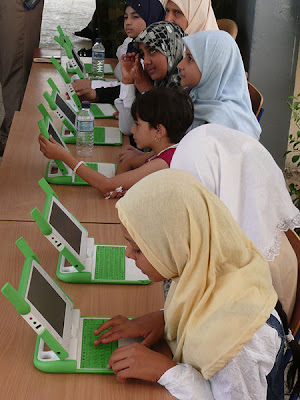 One Laptop per Child, or OLPC, is an ambitious experiment to help provide "educational opportunities for the world's poorest children by providing each child with a rugged, low-cost, low-power, connected laptop with content and software designed for collaborative, joyful, self-empowered learning."  Their product to help achieve this goal was the XO laptop.

What brings this to mind is that recently I was walking through an office supply store and was browsing through the various laptops they offer.  I was surprised to notice laptops at the price of $199.  I remember my first laptop costing more tan $1000 and the technology was a fraction of these tiny computers, but it seems that the recession has had a faster effect on the electronics industry then the automotive industry.  Portable computers have gotten smaller and more efficient.  The reason why I thought of OLPC was that a few years back, the goal of the non-profit was to manufacture and sell these laptops for $100.

I remember articles at the time that expressed the difficulty, and possiblity of it being impossible to achieve such a price anytime soon.  In 2006, they had hoped for the price to be $100, but saw it realistically floating between $100 and $200, with the computer eventually being sold for around $200, back in 2007.  What is so interesting is that laptop prices had not fallen until 2009, 2 years after the intial production of the XO computers.  Why did it take so long for the market to catch up with these special laptops?

Although these laptops are not the same as one you or I may buy at the store, the technology involved is amazing, so I am curious as to why laptops are finally coming down.  Without doing any research, I believe that it may be because of the same philosophy that doomed car manufacturers, such as GM and Chrysler.  Computer companies were making bigger and faster computers, with large displays, ergonomic features, and numerous amount of ports and plugs and whatevers.  Where the comparison changes is that the computer industry realized that there is profit in smaller, more specialized units as well.  More people have a couple hundred dollars to spend ona  computer, rather thena  few who have thousands to spend on a computer, where in some instances,a  person's computer costs more than their car.  Part of me also believes that the computer industry had kept prices for their products artifically high, and have only recently decided to give in to the market because profits started to slip and shareholders came running to their door... with no government bailout in store for them.

All in all, I just thought this to be interesting.  As of today, OLPC has sold over one million laptops, and I hope that they continue, but I hope computer companies continue with their new product lines, because eventually when I need to buy my next computer, I want a cheap fix to my computer problems.
Posted by Kevin at 6:03 PM