The GOP State: The New Sodom and Gomorrah

I have been listening to Fox News this morning while cooking my lunch.  I have found it interesting because of how they are discussing President Obama and his future speech.  Much like the "indoctrination" belief held by commentators prior to Obama's politically benign speech to school children, the commentators are discussing the what ifs of the speech that has not yet been spoke, and are then speculating on those scenarios.  The further they get into the discussion, the further they remove themselves from fact and closer to situation that positions themselves as America's saviors.

The discussion started off about health care reform, moved to Obama's speech to a joint session of the House and the Senate, and has switched to Obama supposedly telling people that his politics are morally correct, making everyone else's beliefs wrong, and in essence morally corrupt.  The discussion ends with the mention of a statistic that the elderly do not support this reform and that that particular demographic will wind up with legislation that they do not like.

What is wrong with this?

Watching the end of the program, one would believe Obama had made a claim that Americans should support his legislation because it is sanctioned by God, and that the elderly, one of the largest voting blocs, are losing out.  Who is this message tailored to?  In my opinion, it seems as if it is targeting the Republican base, proposing a possible attack on religion, and it is targeting the elderly, who are much more reliable voters then the youth, and can be easy to scare, with rumors of threatening their already government paid for health care.  If you saw the beginning of the discussion, you would discover that Obama had not said any of these things, but that does not matter, because those with short term memory (or selective memory) or who are not paying attention to the television will have no recollection of, but what they will remember is what effects them, and that is what will hook them into the program, and the belief against anything Obama.

Flipping through the channels, I had also come across a program discussing the biblical cities of Sodom and Gomorrah.  The bible stories had me thinking about the current health care debate, and this possible affront to people's religion, but mostly to the Christian faith (considering the conservative attack on Islam last election due to rumors Obama was Muslim). 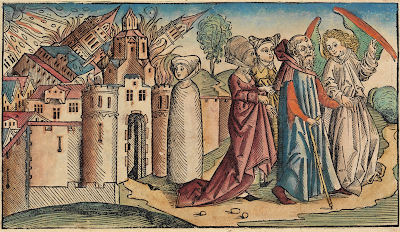 In the tale of Sodom and Gomorrah, the two cities were destroyed by God, with some associating their destruction with sexual deviance, hence the word "sodomy", but original focus on their destruction was more closely associated with their lack of hospitality, as well as economic crimes, blasphemy, and bloodshed.  I would like to focus on the economic crimes and why this relates to why this came to mind when I was watching Fox News discuss health care.

The Sodomites valued property and money.


Now this was the sin of Sodom: She and her daughters were arrogant, overfed and unconcerned; they did not help the poor and needy. They were haughty and did detestable things before me. Therefore I did away with them as you have seen.
Ezekial 16:49-50

For this, among other things, they were destroyed.  Conservatives support a free market system, and oppose government regulation.  The common opinion is that free enterprise will cure all woes, and in some instances, it can, but given a fully deregulated economy, the free market tends to go for the cheap fix.  We are far removed from the days of child labor and atrocious work settings, but now the fight has advanced to the health care debate.  Why is it that American's work harder and longer then France, but have a worse and more expensive health care system?  Could it be because of greed, and are we returning to the world of Gordon Gekko, from Oliver Stone's Wall Street?  I find it a contradiction for those who follow the teachings of the bible to oppose health reform, but then again, people have waged war in the name of religion, and have justified their cause, but this is far from taking the life of another human.

My analysis is extremely simplified, but the principles carry on to larger fields.  What are the opinions of the churches and various religious organizations?  What does the papacy think?  Billy Graham?  Benny Hinn?
Posted by Kevin at 4:33 PM