The other day I received in the mail the 2009 Obama Agenda Survey from the republican National Committee.  I decided that I would fill it out, but as I was filling it out, it occurred to me that the questions were not created to actually guage what Republicans actually thought, or to create any constructive argument, but was more of a reinforcement of the party's core beliefs.  The survey was accompanied by a four page letter from Chairmant Michael Steele, and in that letter, there were some things that I found interesting.  On the bottom of the letter, it also indicates that the letter was not printed at taxpayers' expense.

In the letter, the Chairman calls upon my "immediate action" on filling out a questionnaire to determine where I stand, as a grassroots Republican, stand on critical issues.  The sentence directly after this one states that the "liberal media elites and the Obama Democrats" do not want me to respond.  He underlines that they want me to "give up" and he reassures me that the Republican Party "is not dead".  To me, he is starting off with the right wing craziness already, referring to the liberal media, but to me, it also appears as if he is on the defensive.  He opened up taking swings and attempts to dispel any perceived doubts I may have.  The following sentence was printed in bold, where Steele writes "I'm asking you to please not turn your back on us now."

This next sentence made me laugh.  "We have a strong minority in the U.S. House and in the U.S. Senate.  We intend to use both to actively oppose and expose the truth about the Obama Democrat agenda."  There he goes again referring to the Obama Democrats.  I believe he keeps making this distinction because the Republicans are still a minority, and so they are trying to convert those who align themselves with the opposite party, but by differentiating between a Democrat and an Obama Democrat, just maybe they can make a difference.  I found more humorous that Steele states they have a "strong minority".  What exactly does that mean?  The republicans have 40% of the seats in Congress.  Is he insinuating that although hey are not the majority, they represent the majority?  I don't know but read his next sentence, which is written in bold again, "We believe that you and every one of the more than 60 million voters all across our country who did not vote for Barack Obama deserve to have a voice in the way this country is governed."  I thought that is what their "strong minority was for".

Steele goes on to discuss the survey, stating that my response is to accurately sample Republican opinions from my area, but as I will later demonstrate, the questions are less to gauge my opinions, and more to reinforce Republican dogma.  Before the survey begins (presuming one reads every page in order), Steele goes on to discuss what exactly the Obama administration's agenda is, stating that there is not "overwhelming support for many of the radical proposals being put forward by Obama and the Democrats".  He asks me to respond to find out where I stand on "Barack Obama's promise to raise taxes", or his plan to give "amnesty to illegal immigrants" that can lead to government handouts totaling billions of dollars and possibly bankrupting Social Security.  He wants to know how I feel about Obama wanting to nationalize health care and put D.C. bureaucrats in charge, and he wants me to respond to these "top priorities" of the administration before they bring about "change" that will "stifle our fragile economy, undermine our nation's sovereignty and create a massive new government bureaucracy".  As a side thought, Steele believes that the economy is "fragile" but I recall another prominent Republican, Senator John McCain, stating during the campaign that the economy was "fundamentally strong".

Steele goes on to state that they will make sure Democrats are accountable for their actions and hold them to their record now that they are "in total control of the federal government."  He makes a shift from discussing the Obama administration to fund raising, stating that Obama had raised over $650 million during last year, out-raising Republicans 2-1, and requires me to contribute to the party to be able to compete against the "radical left-wing Obama agenda".  He references the media again stating they act as if Obama and his liberal agenda received "100%" of the vote.  He again mentions that 60 million Americans did not support Obama in the last election.  I think it is important to note that last year had the highest voter turnout since 1968, with 56.8% percent of the eligible voting population participating in the election.  There are 231,229,580 Americans who can vote, and in the last election, roughly 25% of them voted for the Republican party, with roughly 70 million people voting for Barack Obama, or 30% of the eligible voting population, so in all fairness, the Republicans could be accurate in stating they represent a strong minority, because those who chose not to be represented may align themselves with the Republicans, decreasing the disparity between the two groups, but considering the outcome of the previous election, one could say that control of the government was ceded to the Democrats, or at least until next election, and only time will tell what those results would be.

Michael Steele states that the purpose of the Obama Agenda Survey is to help the Republican Party "refocus and rebuild" to prevent not only the administration's "agenda of special interest handouts and ultra-liberal big government policies".  Steele wants to reassure everyone who received this questionnaire that the Republican Party does not want to be the party that opposes everything the Obama administration does, but Steele states that they were put on the defensive because according to him, "Democrats in Congress put partisan politics in front of the best interests of the nation, attacked our leaders with personal smears, and saturated the media with propaganda."  Is he certain of this?  Using the results of this questionnaire, Steele and the GOP want to move forward, offering substantive alternatives based on their "conservative principles and free market ideals".

Here are the questions included in the questionnaire that accompanied the Chairman's letter, scanned to show the exact order and wording of each: 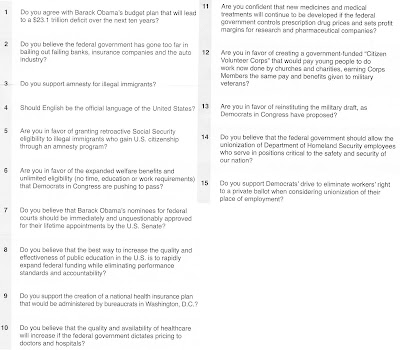 If you read the questions, what exactly would your answers be?  Who would answer "yes" to some of these questions, that are obviously weighted?  Overall, these questions are interesting, because they indicate the Republican Party is only interested in furthering themselves from the center.
Posted by Kevin at 11:51 AM