Warner Todd Huston had a very interesting revelation on Monday - Fox News is biased towards Republicans.  But Huston stopped short of admitting that the station is a propaganda wing for the Republican Party. Basically, in a post attacking Media Matters for America, Huston claims that Media Matters was once a legitimate organization but is now engaging in borderline illegal behavior and is violating its tax exempt status all because the website has been focusing on Fox News' lies.


In other words, Media Matters is treating Fox as a political organization and not a media conglomerate. “Fox News is not a news organization. It is the de facto leader of the GOP,” MMfA’s Brock told Politico.

But this is obviously an illicit campaign. Fox is clearly not some sort of arm of the Republican Party. Does Fox have a leaning toward the GOP and/or the conservative side of the issue? Sure, without a doubt. But it is still a media organization separate and distinct from political organizations. Fox News is no adjunct of the GOP any more than NBC, CBS, ABC, or even MSNBC are somehow arms of the Democrat Party.

But this is the left, folks. This is the hatred and the attack dog-style that the left specializes in.

Media Matters was once a perfectly legitimate, though left-wing media critic. Now it is a gutter sniping, mud slinging, dumpster diving, blackmailing, saboteur. I’d call it the National Enquirer of the Internet, but even that isn’t mean enough to describe MM.

Huston fails to understand the entire picture.  He admits Fox News is biased against Democrats, but then argues that it is not an extension of the Republican Party - he seems to forget the numerous politipundits, or politicians (including former politicians) who are employed by the station, such as former Arkansas governor and 2008 presidential candidate Mike Huckabee, former half-term governor of Alaska and 2008 vice presidential candidate Sarah Palin, former Speaker Newt Gingrich, former senator Rick "Dick" Santorum, former GOP rpolitical consultant and Deputy Chief of Staff under President George W. Bush Karl Rove - all Republican.  And don't forget Fox's parent commpany News Corp. donating $1 million to the Republican Governors Association.  What other station has that many politicians working as a "fair and balanced" contributor?

The answer is none.

While fans of Fox News like to scream of media bias, insisting that NBC, CBS, ABS, MSNBC, and CNN are all propaganda machines for the Obama administration, none have shown a willingness to skew facts and promote one side of the argument like Fox News has, which leads me to the point of Huston's article - he believes Media Matters unfairly targets Fox News.

"Media Matters is treating Fox as a political organization and not a media conglomerate" wrote Huston.

The readers of Huston's piece were quick to chime in on the matter.  "[Media Matters] claims to be non-partisan and claims a non-profit status to gain tax-exemption," wrote one individual.  "The illegality is not a speech issue, but in fraudulently representing themselves as non-partisan/non-profit before the IRS."

Most other commenters claimed that Media Matters posts lies and insisted George Soros was to blame.

What is interesting is considering what exactly Media Matters posts on their website and how it relates to Huston's claim that Fox News is biased towards Republicans.  All Media Matters posts is audio and video clips and quotes by those they discuss, as well as past comments made by those individuals and any evidence proving those comments otherwise.  They don't cut up videos to provide contextually false material for their articles - like the way Andrew Breitbart did with his Shirley Sherrod smear campaign - and they don't lie about the people at places like Fox News because they fully quote those people to give the correct context of the statements.

Now taking Huston's statement regarding Fox News' bias and applying it towards the desire by Big Journalism's fans to strip Media Matters of their non-profit status (while presumably supporting James O'Keefe's quest to make Project Veritas a charity), one would see that Huston and his sheep are greatly mistaken - if Fox News is biased towards the right, then by default any fact-checking conducted by Media Matters would instantly place their coverage left of right, or in the center.  If there is a liberal bias to Media Matters, it is not because they lean in a particular direction, but because they are to the left of the admittedly right-leaning Fox News.

It is probably safe to say many of these critics nnever even visited Media Matters - just take a look at one of their articles targeting Fox News - I guarantee you will find a piece with nothing more then a bunch of supporting evidence proving their point, which hardly makes them partisan.  By Huston's own logic, the media should not be allowed to criticize anything outside of politics - especially Fox News and the Republicans...

Oh, and just in case you wanted to see a simple example of what Media Matters does, I point to this article where Media Matters exposes Fox News for altering the images of its guests in a less-than-flattering-way, yellowing teeth, expanding the forhead, and enlarging the nose and ears. 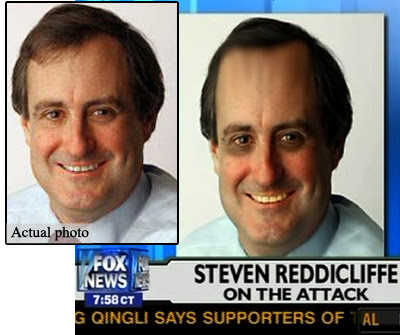 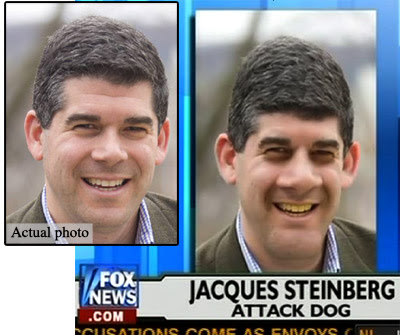 So is it safe to say Media Matter's focus on Fox News is anything but wrong?