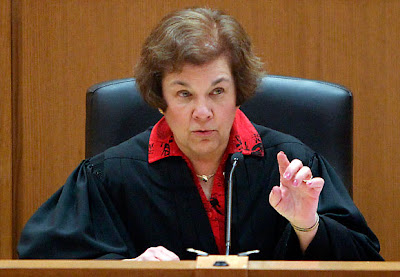 Monica Davey wrote the following for The New York Times:

The decision, issued by Judge Maryann Sumi of the Dane County Circuit Court, temporarily bars Wisconsin’s secretary of state from publishing the controversial law, one of the procedural requirements for it to come into effect in the state. Publication had been expected late next week, but Judge Sumi’s ruling delays that until at least March 29, when she plans to hold a full hearing on a lawsuit that questions the validity of the collective bargaining law based on the speedy manner in which it was carried out earlier this month.

That doesn't matter though - ignorant conservatives are already claiming judicial activism and court shopping by Democrats to find a sympathetic judge.

"It seems to me the public policy behind effective enforcement of the open meeting law is so strong that it does outweigh the interest, at least at this time, which may exist in favor of sustaining the validity of the (law)," said Sumi.

The public policy Sumi is referring to is Wisconsin's open meetings law.  Republicans still claim they were in the right.

With this issue moving through the legal system, Republicans still have the option of ramming this legislation through again - they just have to do everything according to public policy first...