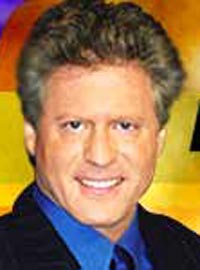 Wayne Allyn Root, a contributor for Andrew Breitbart's propaganda website Big Government, had thought there was a considerable amount of similarities between the recent protests occuring in Egypt and the dissatisfaction with Obama and the Democrats by conservatives that he decided to make a post discussing America's possible future - America's scary future the far-right predicts will occur, and soon, too.


Barack Obama and the U.S. government have called for a “peaceful transition” in Egypt, in response to massive protests, riots and escalating anarchy. But I wonder if President Obama is taking notes? I wonder if he realizes just how close America is to facing a similar crisis that could result in riots, revolt in the streets, and economic paralysis. I wonder if President Obama would act much different than President Mubarak in Egypt. So far, small signs hint that Obama might turn out to be just as intolerant to dissent as Mubarak.

Root lists off a bunch of things proving an "economic Armageddon" is looming in the distance, ranging from high unemployment (Root believes he knows the "real" unemployment numbers) to radical Islam overrunning the Middle East causing a nightmare for global investors and a collapse of world markets as we know of.  After Root's list of extremes, he comes to the following conclusion:


Our “real” U.S. unemployment may in fact be close to 20%. Among youth and minorities unemployment may be well over 30%. For the first time in modern history, there are few jobs for millions of new college graduates, while they each face education debt of $100,000 or more. There are seemingly no jobs at all for minority youth without college educations. All at the same time that prices are exploding for basic essentials. Sound familiar? Those are the exact same incendiary ingredients that led to revolt, revolution, and anarchy in Egypt.

Root insists that unemployment and student loans are what caused the protests in Egypt.  I think he may be missing something - the fact that Egyptian President Hosni Mubarak is essentially a dictator-for-life.  The government had denied opposition in past presidential referendums, and when elections were finally opened, mass corruption took place, with Mubarak busing government workers to the polls and purchasing votes in poor suburbs and rural areas.  The state also controls a majority of the media and opposition leaders have been jailed.

I wonder if living in essentially a police state would have played a role in the recent protests?

Root then goes on to ask the following questions:


So how will President Obama react to massive protests, riots, and revolt in the USA? Will he choose to shut down the Internet? He criticizes Mubarak, yet Obama is already asking Congress for the authority to do just that (without judicial review). Will Obama cut off access to Facebook and Twitter? Will he try to shut down talk radio and FOX News? Obama and his Democratic allies have already suggested doing that (before a true crisis) with “The Fairness Act.” Will Obama attempt to ban guns? He has already come out strongly in support of gun control or bans on numerous occasions before he was even elected President. Will Obama call in the military to contain the riots of unemployed, hungry, angry youth here in America’s biggest cities? Will he allow free speech — even if massive protests call for Obama to step down?

"Will he allow free speech — even if massive protests call for Obama to step down?"

Wasn't that the point of pretty much every tea party rally that has taken place over the last two years?

What about Root's other questions?

In regards to shutting down the internet, he fails to mention that Republican Senator Susan Collins indicated that she would bring the "kill switch" legislation into discussion again.

According to Root, President Obama wants to bring back "The Fairness Act," but Obama's press secreterary stated in 2008 that the then-senator opposed "The Fairness Act," and that position was reaffirmed after he won the presidency.  The same can be said about Obama's willingness to ban firearms.  The president has come out in support of 2nd Amendment rights, with an emphasis on common sense control legislation - his support of local gun bans actually is similar to the right-wing's states' rights sentiments, in that local governments have the right to make varying degrees of regulation, such as a ban on a particular firearm (I personally believe a full weapons ban is ridiculous, but support restrictions on assault weapons or similar firearms).

I also find Root's insistence that the unemployed, hungry, students will begin to riot.  First, I didn't realize every student had debts of over $100,000 dollars, and secondly, I could have sworn it was the Democrats that were proposing unemployment and pro-student legislation and it was the Republicans that were blocking such legislation, so wouldn't those unemployed, hungry, and angry youth rally behind the president's party? 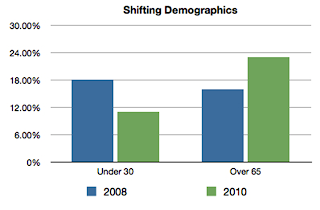 Also, while Root's belief that the youth will rise up against the administration is most likely based off of Republican victories during the midterm elections, demographics indicate a shift in voter age.  The under 30 crowd stayed home last year while the over 65 bloc mobilized and headed to the polls - different from just two years before.

So, if the youth are to apathetic to vote, what makes Root think they will find the energy to revolt?

Maybe Root should spend less time finding silly political analogies to prove his point and more time learning the facts.
Posted by Kevin at 2:51 AM