It has come to my attention that conservative Catholic Radio International personality Jeff Gardner attacked both this website and myself on his most recent program discussing the images depicting anti-abortion activist Lila Rose in compromising positions.

Gardner climbed up on his high-horse claiming I was a "JC college drop out" and that I lacked journalistic experience to comment on the facts of the matter - his facts.  In an interview with Veracity Stew managing editor Steve Moore, Gardner decided to attack my character and protect little Lila at all costs, ignoring facts like proof that Lila Rose was caught red-handed deceptively editing the audio of her video projects to alter the context of the meeting between her actors and the Planned Parenthood clinic workers - in regards to Rose selectively editing the videos, Gardner insisted that "we ave no proof of that," when in fact we do.

I had contacted Gardner to demand an apology and a retraction for slandering my name, and Gardner responded saying he had linked to a retraction on his website.

"I have posted an audio correction on the show page that addresses your concerns," wrote Gardner in an email to myself. "Thanks for listening and best of luck on getting back to school soon."

Gardner's correction was anything but - he still called me a "drop out" and then complained that I "squealed" over 5-seconds of audio when I wrote 500 words about his precious Lila.  For someone who values journalism and sources, Gardner decided his assumptions were good enough. 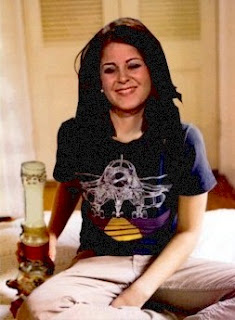 We can understand why Gardner would rather place his trust in Lila Rose - during his interview with Moore he couldn't help but wonder why someone who would allegedly doctor an image of Rose make the effort to censor her breasts.  Gardner had even urged for his listeners to visit the offending website, but not with children in the room, so they can see these pictures for themselves.

For someone repulsed by images of his darling Lila in compromising positions, he sure has no qualms spreading them across the internet.

To cap off his apology, Gardner decided to call me a "knucklehead."

In the comment portion of a Veracity Stew article reviewing the interview between Gardner and Moore, Gardner actually responded to the piece by trying to sway a reader of Veracity Stew to become pro-life, claiming the real issue was not a couple pictures of a high-as-a-kite scantily-clad Lila Rose, but rather a "matter of life and death."  Gardner then babbled about how secular Live Action is and when a life begins.

I left a response to Gardner, but I don't expect him to respond.


An absence of theological rhetoric or imagery on Live Action’s website does not mean a thing. You could proselytize all you want but that doesn’t change the fact that Lila Rose uses highly deceptive methods to obtain results.

You have not given us a reason why we should trust Lila Rose.

Let us consider something about Rose’s videos – she claims they depict Planned Parenthood “aiding and abetting” pimps and prostitutes operate an underage sex ring.

If that is the case, why did Lila Rose sit on her footage for over three weeks before she contacted the authorities with her damning proof?

Could it be because of her vanity?

She wanted the scoop on Fox News and Andrew Breitbart’s websites so she ignored the possibility of any wrongdoing until it was beneficial for her.

What’s another rape victim when you can get $50,000 more in grants?

Basically, Gardner and Rose are frauds.  They are Catholics of convenience - con today, confession tomorrow.
Posted by Kevin at 4:16 PM