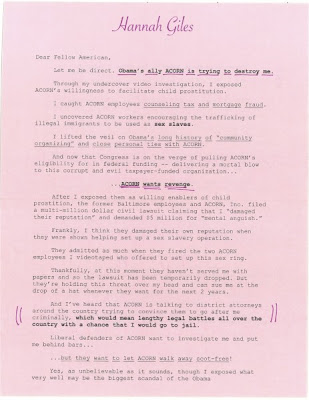 It appears the Hannah Giles Legal Defense Fund is looking for donors, sending out a five page letter on pink paper pleading for help against the evil ACORN. According to the letter, ACORN, "Obama's ally" is out to get her, dangling the threat of a lawsuit over her head, and while there currently is no lawsuit, Hannah fears that she may be faced with future lawsuits from the organization as revenge for her seceret videotapes made with  fellow conservative activist James O'Keefe.

What I find particularly interesting is that Giles' letter states that ACORN is speaking to various district attorneys to try and bring criminal charges against her, forcing her to fight legal battles all over the country with "chance" that she would go to jail.  Assuming that her defense has merit and that ACORN's claims are baseless, then Giles' fear of going to jail seems to be irrelevant, unless ACORN has substantial evidence against the video prostitute that can send her away.  Why else would she need so much money, which according to her letter could be in the millions?

It is also interesting that Giles' letter pins the financial crisis on ACORN's involvement in "mortgage rackets" and refers to O'Keefe as a "would be" politician, not a pimp.  It seems that her letter for help is not only a piece of revisionist propaganda, but also an interesting prop in her continuing quest to discredit the community organization and the current administration.
Posted by Kevin at 3:13 AM