What do hand-carved log home doors, a dating website, garage organizers, the cure for cancer, penis enlargement, and countless racist comments have in common?  They are all "inventions" and schemes of Andrew Breitbart's lackey Dr. Kevin Pezzi - the newest contributor to Big Government.  Media Matters had detailed just what exactly this clown is involved in, and it sounds like he is the biggest scam artist and racist out there - he claims that it is okay to use the word "chink" just so long as you use it to refer to the "bad Chinese."  He also believes slavery was a good thing because the descendants of slaves have it better in America.

So, why is this idiot important?

According to Pezzi, Andrew Breitbart asked him to contribute to his website, and what exactly did he contribute?

A smear against Shirley Sherrod.

Once Media Matters pointed out Pezzi was a contributor to Big Government, as well as all the ridiculous scams he was involved in, Big Government scrubbed any mention of Pezzi from their website and issued a vague apology that was also void of Pezzi's name.  Surely Breitbart knew who he was getting - here was Pezzi's Big Government profile: 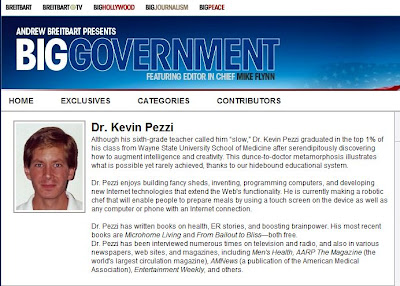 Pezzi is important because it demonstrates clearly just what kind of operation Breitbart is running.  He acquires all these fly-by-night contributors and manipulated videos and posts them willy-nilly on his websites, but then when things go south, Breitbart tries to wash his hands of the situation and claim that he knew nothing was out of sorts, giving various excuses as to why he is not to blame - maybe he failed to realize that he puts his name right there in the header.

If the Ringling Bros. put on a show where the animals run rampant, who would you blame?

The same goes for Breitbart.  He is nothing more then a over-popularized man-child who serves no purpose in today's political atmosphere - call him the Lindsay Lohan of bloggers.

The only thing I am curious about is whether or not Pezzi was some sort of joke - an April fools of some kind - although I doubt he is.  Based on Breitbart's past associations, I believe this story to be all the more true (and scary).
Posted by Kevin at 12:46 AM