From a Sam Stein article a couple days ago:


Top Republican leaders in the House offered a fairly strong signal on Sunday that they would favor a down-the-road raising of the Social Security retirement age as part of an effort to revamp the entitlement program.

Appearing on NBC's "Meet the Press," Minority Leader John Boehner (R-Ohio) said it was time "for the American people to have an adult conversation about the problems that we face" with respect to Social Security's solvency.

"We also know these programs are unsustainable in their current form," said the Ohio Republican. Asked specifically if he supports raising the retirement age to, say, 70, Boehner replied: "There are a lot of options on how you solve these, but I don't want to put the cart before the horse."

This wasn't the first time Boehner had broached the idea of raising Social Security's retirement age. The Minority Leader offered the same suggestion in an interview in late June. Back then, Democrats jumped on the remark, arguing that it was (one) not based in a realistic assessment of Social Security's solvency and (two) insensitive to those people who worked all their lives with an eye towards having a financially-stable retirement. It would be far from surprising if the same arguments are made in the days ahead.

Indeed, a platform of raising of the retirement age presents tricky politics for Republicans. Later during the "Meet the Press" program, Boehner's deputy, Rep. Mike Pence (R-Ind), was asked if he supported the idea. The Indiana Republican stammered around for a bit, echoing the same talking point concerning the need for "an adult conversation about domestic spending and entitlements."

Pinned down by host David Gregory, he ultimately replied: "I am for reforming our public entitlements for Americans who are far away from retirement. We need to keep promises to seniors that have been made, make sure that people who are counting on Medicare, Social Security have the benefits that they have. But for younger Americans, absolutely yes, we ought to bring real reform for the sake of future generations of Americans to get spending under control."

Boehner discussed raising the age of eligibility for Social Security before, stating in an interview that it was time the government stopped giving handouts so the government could use the money tied up in Social Security as a massive slush fund to pay for all the GOP's pet projects, like spreadin' Democracy in the Middle East.

"We need to look at the American people and explain to them that we're broke," Boehner said. "If you have substantial non-Social Security income while you're retired, why are we paying you at a time when we're broke? We just need to be honest with people."

As I had written back in June, Boehner seems to forget that the American people have been putting money into the system for close to 75 years now - Social Security is not some sort of government program that just materialized overnight to dole out cash.  Obviously the Republicans plan on rolling with this idea because this is the second time in two months that they made their intentions public.  They essentially want to tax the elderly, but their newest statements got even more political then their last - they single out tomorrow's senior citizen's, not today's - Just look at Mike Pence's comment above.

Why is the GOP promising not to touch their social security?

I believe it is because the Republicans have learned from their tea party crusade against universal health care that the elderly conservatives want government to stay away from their entitlements - just look at the following picture of a teabag protester and his sign (he comes complete with a NRA hat): 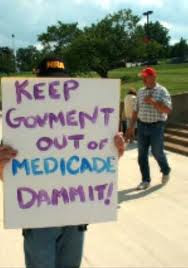 But that brings to question just why is it okay to keep benefits for some but not for others, despite the same promises being made?

Just look at the voting trends of just how the youth (tomorrow's seniors) vote: 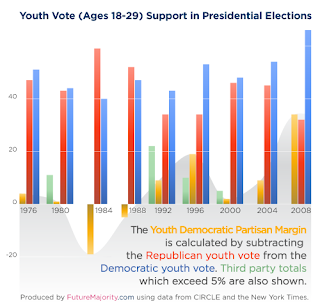 In pretty much every graph depicting political trends of younger voters, it appears that the Republicans are on the losing side, so it would be politically advantageous to protect current senior citizens who are more likely to vote Republican and attack future (as well as current) non-Republicans, hopefully ending their entitelements possibly placing them into a second-class citizenship status in the future, destined to be at the will of the wealthy, healthy, and conservative...
Posted by Kevin at 12:58 PM