The Other Midnight Reviews 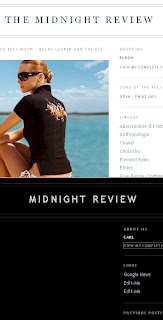 I thought this was worth pointing out - this website has come under attack from a conservative activist and right-wing Christian blogger who claims this site plagiarized his because of the similarity of names. This person's blog, Midknight Review, spreads gossip and lies in the attempt to establish them as fact - the author, John Smithson, admitted to this on another message board they contribute to. According to Smithson, he has been blogging since 2007, but I had found something very interesting - two other blogs by the Midnight Review have been online before Smithson started his website.

Both websites originated in 2006, before Smithson started blogging. One was never started and features a blank page with only a title while the other is a fashion blog that ceased posting back in 2007. Did Smithson plagiarize his title from these two earlier websites?

The answer to that question is "probably not."

I doubt Smithson had ever even seen these websites, let alone heard of them, but the point I am making is that Smithson had claimed that this website plagiarized his site's name, despite the authors of this site never even hearing of his little-known blog.

I thought I would point this out because it has been 126 days since Smithson "issued" his cease and desist against this site claiming legal superiority.
Posted by Kevin at 10:34 AM