Small time conservative activist and right-wing blogger John Smithson had written a post that this author found particularly interesting.  Apparently Smithson is in Utah with three of his pals writing a book and he decided to share some of what he wrote so that we know just how pious he really is:

Smithson then goes on to write about how he knows everybody's "truth" - this is what I found to be of most interest.


Understand that politics are a distraction that effect my (our) life but the issue of faith is that which gives us the where-with-all to deal with life's circumstance. No faith, no fulfillment -- and I don't who you are, this is the truth for you, a " truth" you will deal with until the day you die. OF COURSE I CANNOT PROVE IT, but neither can you prove any of a number of mathematical functions (i.e. "postulates") . You have no clue about tomorrow. You go to sleep BELIEVING that you will wake up to a new day with new assignments and promises. In fact, it is "faith" that puts your butt into a chair. You "sit" believing that that particular chair will hold you up. You live your life by faith every time you pass through an intersection or plan an event -- it all begins with "faith."

This isn't the first time Smithson had made such comments - back in June, he had asserted that mathematics is based on "unprovable axioms," such as all right angles are equal to one another.  Maybe they don't teach math in seminary but last time I checked 90° is 90°, and that is not based on faith - it is based on fact.  The reason why I find this interesting is because Smithson uses his faulty logic to prove that his religion is correct, but not just for himself - he believes that his religion is the truth for everyone regardless of what they believe.

This is important because Smithson, a two-bit preacher, is also a self-proclaimed conservative activist, and throughout his blog, he has spread countless number of lies and propaganda to advance his agenda with an end goal of subjugating the rest of the population under his idea of what America should be.  This line of thought goes for the entire tea party movement - if their name stands for "taxed enough already," why are they protesting the construction of mosques around the United States?

Basically, people like Smithson long for the day of the "nanny state" looking over our every moves, telling us what to do, what to believe in.

Reading Smithson's blog, I wanted to point out something else that I thought interesting - he wrote that "several thousand a month read [his] blog."

I find this quite humorous.

I had written articles back in April and June that analyzed Smithson's site traffic after he initially attacked this website and I had found that Smithson's actual site traffic was not several thousand, but closer to a couple thousand, and it is believed that their site traffic has been trending lower since then.  Smithson had a widget on his blog that displayed a visitor's location and time they entered his website - the daily total was roughly 30-50 hits a day (900-1500 hits a month).  That widget was conveniently removed from his website in time for his claim of "several thousand" - maybe Smithson wants to fool his one and only commenter - imataxpayertoo - but he isn't fooling this reader...

In all fairness, I guess I should release my figures - in the past 30 days, this site has had over 2,000 unique visits (2,223 to be exact), with 2,999 page views, meaning that people on average read more then one page on this site.  Pretty good numbers considering this webpage posts around half the articles Smithson does - I guess readers prefer quality over quantity.

I end this post with another reason why John Smithson should not be taken seriously on any matter - Smithson displayed a picture (below) on his website insinuating that Supreme Court Justice Elena Kagan was using cocaine. 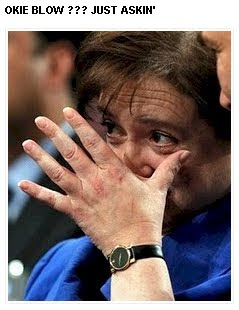 Seeing this picture with its ridiculous caption, how can anyone take an article written, or cut-and-paste, by John Smithson as anything more then worthless propaganda?
Posted by Kevin at 2:27 AM