Ron Futrell wrote an article a couple days ago on Big Journalism discussing the recent overturning of California's Proposition 8 and I thought there was something interesting that I wanted to look at - Futrell wrote that the ruling was not a matter of same-sex marriage, rather it was attempting to define marriage.

I thought that statement was interesting because the statement is wrong - last time I checked it was the defendants of Prop 8 that wished to define marriage.  Just look at the language of the bill: "Only marriage between a man and a woman is valid or recognized in California."

That seems like a definition to me.  This ruling was not a matter of defining marriage - it was actually protecting marriage from the strict confines of the right-wing religious definition.  There is a reason why the right is trying to make this about something other then gay marriage - fear.  Futrell's paragraph above was just a lead-in for why he hates gays so much - he equates them with polygamy and pedophilia, and believes that gay marriage is a gateway marriage, which will eventually lead to all things unholy.  Who knows - maybe beastiality is in the horizon?

Futrell first starts off referencing the hit HBO series Big Love in regards to polygamy, stating that he happens "to not like their definition: one man and 3,4,7, or a dozen women," but then he goes on and on, saying that "they seem to like them rather young."  He then makes the crazy assertion that if Prop 8 stands, polygamy will become legal, and then asks when "Young Love" will become legal - Futrell must not realize that Big Love is fiction and not a documentary, and if he ever watched the show, he would realize that the main character, Bill Henrickson played by Bill Paxton, never commited statutory rape - his wives are all adults.  Futrell's assertion would be like claiming an older man who dumps his wife for a younger woman is a future pedophile because his choice in women seems to be trending younger.

What else does Futrell have to say?


To the media covering this story—think outside the box. This is not just about gay marriage. I know you want it to be because that’s your issue, that’s evident in each of your reports. Try something different.  Do that “live shot” from Colorado City and see what they think about that messy little law that limits the number to a man and a woman. Then ask the town patriarch what he thinks about that messy little law that says he can’t “marry” that 13-year-old girl down the street. Why does marriage have to be between a man and a woman, why not a boy and a woman? Who sets the rules?

Futrell's silly little diatribe reminds me of something else - the ban on interacial dating at the fundamentalist Christian school, Bob Jones University.

Here is what Wikipedia has on the matter:


In May 1975, as it prepared to allow unmarried blacks to enroll, BJU adopted more detailed rules prohibiting interracial dating and marriage—threatening expulsion for any student who dated or married interracially, who advocated interracial marriage, who was "affiliated with any group or organization which holds as one of its goals or advocates interracial marriage," or "who espouse, promote, or encourage others to violate the University's dating rules and regulations."

Of course once attention was brought on the school's policy they quickly scrapped it - Bob Jones III states on Larry King Live back in 2000 that they enacted the rule "because we were trying ... to enforce something, a principle, that is much greater than this. We stand against the one world government, against the coming world of the antichrist," but then they realize that interacial dating is not going to summon the antichrist, probably around the same time they were labeled as being racist, after all, they never reapplied for federal tax-exempt status, so as a for profit university, they had to do something to make sure the money kept rolling in.

Why does the incident surrounding Bob Jones University remind me of Futrell's assertion that Prop 8 saught to define marriage?  It reminds me of BJU because the school saught to define student interactions (much like defendants of the marriage ban) because of their faith.  It is ridiculous to assert that allowing gays to marry would be a win for organizations like NAMBLA because that is not what the ruling was about.  Futrell points to no facts as to why homosexual marriage should be banned - he only points to his fear that pedophilia would be legalized, which even gays are against.

Reading the comments on this article makes not only Futrell, but his fan club seem all the more crazy.

Really?  Trying to tie this to environmentalism?  BBrianL must think of himself as an armchair Glenn Beck.

I don't see how the federal government would be able to force churches to perform gay marriages, after all, the Boy Scouts of America still prohibit homosexuals and their membership rules have been upheld on numerous occaisions by both state and federal courts.

I think Small Thoughts is referring back to the Civil War (the War of Northern Agression for some), in which the federal government acted against the governed, in that case abolishing slavery, a time-honored institution practiced heavily in the south and supported by the majority.

This was an interesting argument - there is no real demand for gay marriage so why bother?  AlistZ then goes on to religious nut territory claiming the government is attacking Christian morality. 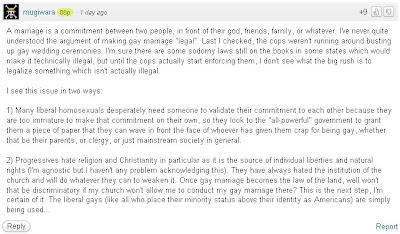 mugiwara doesn't understand the argument of making gay marriage legal?  That is probably because they never had to try and visit their partner on their deathbed only to be refused access, or be denied health benefits because they are not of the opposite sex.  There are other reasons as to why homosexuals would want to get married and it is definitely not for the two reasons mugiwara states - spite and religious animosity.

Wouldn't it be a conflict of interest for a heterosexual judge to hear the case?  After all, they are hearing a case that as Futrell claims, defines marriage, which they can freely enter, so would it be in their best interests to protect what they have and deny others for fear of losing a hold on their reality?

I somewhat agree with the argument for civil unions but creating a separate class of union for the sole purpose of protecting established religions would seem to violate the establishment clause of the constitution.  As for the ulterior motive, I think that churches should lose their tax exempt status should they choose to discriminate - if any church wishes to deny homosexuals marriage, they should be willing to lose tax-exempt status - being tax-exempt is just a way for religion to be subsidized by the government, which in my belief would violate the constitution.  Churches have a right to exist, but their existence should not depend on whether or not they pay taxes - it would probably be the fiscally responsible thing to do - collect taxes on churches, after all, their money would go towards helping a greater portion of America in a cost effective manner. 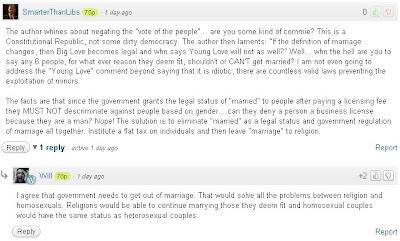 Notice how they don't have the positive comment scores as the above right-wing comments?

I also like how the comment points out that the government is not a democracy, but a representative form of government - this is important because the folks at the Big sites love to reference how we are not a democracy - just see their hatred for the 17th amendment.

Basically, these people feel threatened by gay marriage because they like to impose their beliefs on others - exclusively.  When their beliefs are shown to discriminate and violate the very fibers this nation was founded upon, they throw a temper tantrum.  This essentially explains Andrew Breitbart's existence.
Posted by Kevin at 12:18 PM