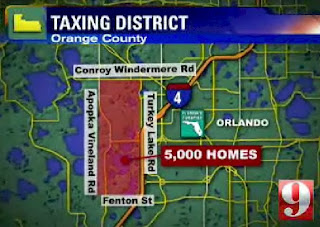 It was brought to my attention that WFTV had a story a couple days ago about a certain group of homeowners that are asking for a tax increase.  When I looked at the news story I thought it was interesting that the man behind the proposed tax was none other than Orlando real estate agent Paul McGarigal.

According to the article, McGarigal wants to impose a tax on an area including roughly 70 subdivisions and businesses to pay for flowers and trees to be placed in the middle of the road so that it does not look like an "airport runway."  McGarigal thinks installing irrigation and plants in the median is a sure way to raise property values in the area, and what better way to convince people he knows what he is talking about then for him to tout the fact that he is a realtor, making him an "expert" on property values.  This is what I found most of interest.

The WFTV article states that McGarigal is a resident of one of the neighborhoods that would be taxed as well as a realtor, but what the article fails to mention is that McGarigal is more then a realtor - he is also the homeowners association president for Clubhouse Estates, the treasurer for Valencia Hills, as well as property owner of numerous houses in the proposed tax district.  He also represents many rental properties in addition to homes for sale.

In addition to all of that, McGarigal has hid behind his job title before - in 2008 McGarigal wrote for the Clubhouse Estates newsletter discussing a sure way to raise property values (stricter covenants and restrictions and mandatory fees), and in June of this year, McGarigal lied in a Sand Lake Hills newsletter about property appraisals - McGarigal claimed to have never "in 25 years of selling over 2,000 houses - had a buyer pay more than the appraised price," despite the fact that McGarigal himself had bought a house in Sand Lake Hills for over the appraised value.

I would also like to point out that McGarigal told WFTV that it is only a "small, small tax" to increase property values, but what about the other things McGarigal claimed would raise property values?  Despite his involvement with neighborhoods like Clubhouse Estates, Bay Lakes at Granada or Sand Lake Hills, where he had worked to create stricter covenants and restrictions to help increase home prices, property values had since decreased.

This isn't the first time that McGarigal or his HOA buddies have tried to use taxes to get around budget items neighborhood residents just didn't wan't either - the board of directors for Sand Lake Hills (which McGarigal has worked closely with in the past) could not drum up the support to build a perimeter wall for all the Sand Lake Hills subdivisions,  all in the name of increased property values, so instead of giving up, the board had the county create a Municiple Service Benefit Unit adding several hundred dollars to the homeowners' taxes to build there wall, and since the wall's completion property values have only declined - also, considering the fact that property values declined consistently with the regional trend of Dr. Phillips further proves that despite the housing bubble burst, the wall did nothing to increase property values (the board promised an increase of around $10,000).

If McGarigal's past promises haven't materialized, why would anyone believe him now when he says that flowers and trees in the middle of the road will increase our property values?

McGarigal is only trying to increase everyone's taxes because he has ulterior motives - as a real estate agent for the area who has numerous clients in the region, as well as being someone who owns numerous properties, McGarigal is looking out for his own economic interests.  He has plenty of investment properties that he believes would benefit from higher taxes (and stricter covenants and restrictions).

“The complicated part about it is when you have HOA’s who are struggling to get some of their dues paid, may not be something that a lot of people will latch on to,” said Commissioner Scott Boyd, Orange County.

If people are struggling to pay HOA dues, what makes Commisioner Boyd believe people have the money for this frivolous tax?  If McGarigal really wants flowers in the road, he can try an enter into a use agreement with the county and plant these flowers on his own dime.

Update - It also doesn't look really good that Paul McGarigal is a member of the West Orange Chamber of Commerce where Commissioner Boyd sits as a board member - it gives the appearance that Boyd is giving into business interests by holding a vote for a tax increase at the request of a prominent real estate agent of the region. Would Boyd extend that same courtesy to any other of his constituents?
Posted by Kevin at 12:04 PM