I saw this pie chart on Politics Plus and thought it spoke volumes as to why the Bush tax cuts need to expire: 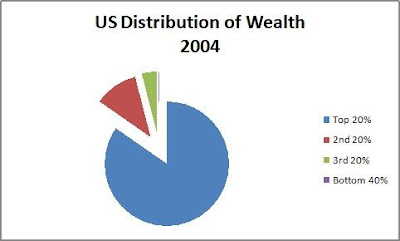 In 2004, the bottom 40% of America controlled only 0.2% of the wealth of this nation.  Allowing the tax cuts to expire will not affect the majority of the population and would have have only a minimal effect on top tier earners - small businesses and average Americans would not be harmed in the expiration of the tax cuts.
Posted by Kevin at 12:17 PM