In response to President Obama's support for the "right" for the Islamic community center to be built, Sarah Palin had decided to "refudiate" his call witha series of tweets, which is appropriate for the former half-term governor of Alaska - it is hard enough for her to articulate an entire speech, let alone a couple 140-character messages online. 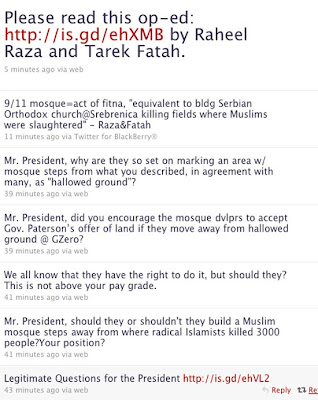 I think conservatives lost the "wisdom" argument when their teabag minions decided to protest other mosques around the country.  I also find it funny that Palin references the Srebrenica Genocide - a slaughtering of Muslims by the Serbian Orthodox Church (a Christian faith).  Palin liked to differentiate in her past posts between Muslims and "peaceful Muslims," but where are her calls on peaceful Christians to support Muslim-American religious rights?

Read the Palingates analysis here - it is very detailed and offers many perspectives from a great community of online bloggers.
Posted by Kevin at 12:33 PM