I saw this article on Big Government by Dr. Paul Moreno about The Mann Act titled "How Prostitution Killed the Constitution" and found it to be very interesting, mainly because Moreno argues that the government's extension of authority through the commerce clause to prevent trafficking of humans is an abuse of power and not permitted by the Constitution.  I disagree.


Moreno fails to mention that Congress had amended the Mann Act, but mentions such would not fit with his right-wing narrative - the government has definitely abused its power or had done wrong things in the past, and the utilization of the Mann Act would partially fall under the classification of "wrong," but as a nation we have learned from our mistakes.  We no longer permit slavery or exclude women from voting, and just because the government had used the Mann Act in the past does not mean there was permanent damage done.

It is my opinion that Moreno writes his article to insinuate that the current administration is perpetrating similar wrongs that occurred under the original vagueness of the law...

As I am fond of doing, lets take a look at some of the comments left behind on Big Government: 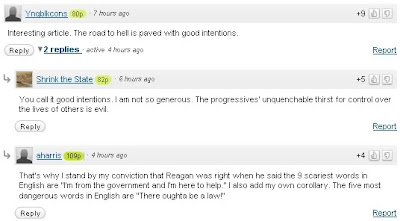 I assume Ynkblkcons would also have a problem with "social justice," which makes me wonder if they would believe Jesus Christ was leading us into damnation with all his kind acts.

Also, Shrink the State makes the obligatory anti-progressive argument, but if he knew his history, James Robert Mann, author of the Mann Act, was a Republican - but the folks at Big Government would probably call him a RINO because he was a moderate. 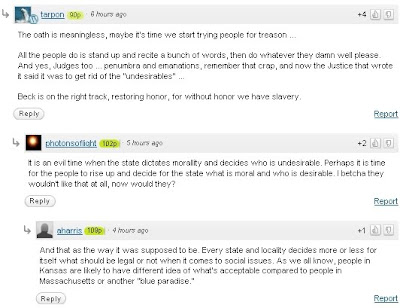 I thought these comments were interesting because they praise Glenn Beck and attack those who wish to "get rid of the 'undesirables,'" yet that is exactly what these people want to do - they view "progressives" and "liberals" as treasanous and wish to use the government to elliminate them because they happen to think differently.  How about homosexuality?  These people probably have a problem with gay marriage and probably support the idea of amendments and state initiatives defining marriage.

I will end this article with the following comment and subsequent commentary:

Again - the legislation mentioned in Moreno's article was authored by a Republican.  I also thought the second half of the comment was interesting - when you click on the link, you are directed to a website operated by the commenter, which then links to the "African Newspaper" in question.  That "newspaper" is allAfrica.com, and the article that may have convinced Kit to become a "birther" is a two-sentence piece by Grace Matsiko stating the following:


Kampala — Ugandans have formed a group to mobilise support for Kenyan born-senator, Barack Obama for the US presidency.

The Obama Solidarity Group (OSP) launched its campaign at Makerere University on January 18, according to one of the members.

If that is enough to change this person's mind, then I'm afraid to see what a book would do...
Posted by Kevin at 4:01 PM