From a Becky Bohrer article on The Huffington Post:


Sarah Palin has been granted a restraining order against a Pennsylvania man accused of stalking and threatening her.

Alaska Magistrate Judge Colleen Ray issued a 20-day protective order on Monday against 18-year-old Shawn R. Christy, after she found probable cause to believe he had stalked the former governor and vice presidential candidate.

Palin and her attorney claimed Christy made implied threats through phone and written messages, allegedly telling Palin to "watch her back," saying he was buying a one-way ticket to Alaska and sending a receipt for a gun purchase.

Palin testified by telephone that she feared for her life, and for her family's safety: "Bottom line is, he is crazy and could kill me," Palin said, according to the court transcript. "He wants me dead."


Palin also testified that he also believes he has some kind of relationship with her daughter, Willow, and has brought up the girl's name.

Christy was ordered to have no contact with Palin's family and to stay a mile away from her home and from a Wasilla area high school. A protective order also was issued for Palin's friend, Kristan Cole, who, according to the document, testified that Christy has been contacting her since 2009.

He had sent her a letter with the proof of a gun purchase, claimed to have had an affair with Palin and wrote, in letters of up to 10 pages long, that "he is trying to follow God but has evil in him, and that he is going to sell everything and come to Alaska with his shotgun," according to the court order.

What I found interesting is that this stalker's comments sound surprisingly like Sarah Palin's comments regarding Democrats.  Remember her map of America with the crosshairs and her "reload" tweets? 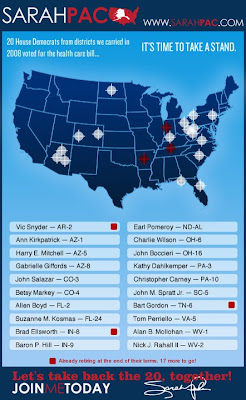 Sounds as if Palin's stalker is taking a cue from the former half-term governor of Alaska - maybe Christy is just clinging to his god and his guns.

And notice how Palin brings up her daughter by claiming she had some sort of relationship with the stalker, whatever that means - Palin has used her children before to target her enemies.  Remember when she implied author Joe McGinniss was some sort of pervert by moving next door and having a view to her daughter's bedroom?  Palingates had an excellent post detailing Palin's use of her daughters to strike those she hates.

Don't get me wrong - Palin did the right thing in alerting authorities and getting a restraining order.  I just wanted to point out the similarities between Palin's rhetoric and her stalkers, because imagine what kind of influence Palin could have on someone who is mentally unstable...
Posted by Kevin at 3:05 AM