I was surprised to see a pro-gay headline on Big Government today and I thought I would like to offer some commentary.  First, let me tell you the title of the article - "Gays In The Military Is A Good Thing" by Andrew Marcus.


Here is what Marcus writes:


Not only are the outstanding men and women of the American Military professional enough to overcome any cohesion issues related to gay soldiers, homosexuals have the added bonus of infuriating our current enemy.

The only thing that would piss off the Jihadis more would be if The US Military formed whole platoons of un-kosher gay Jews. Inglorious Bitches?

What can I say about this post - Marcus' only reason to allow gays in the military is because he believes it would piss off our current enemy - the "Jihadis."  To make it worse, Marcus ponders an all-gay platoon of gay Jews, borrowing the title from the 2009 Quentin Tarantino movie Inglorious Basters by calling the gay soldiers "Inglorious Bitches."

Let's see what the wise readers have to say about this: 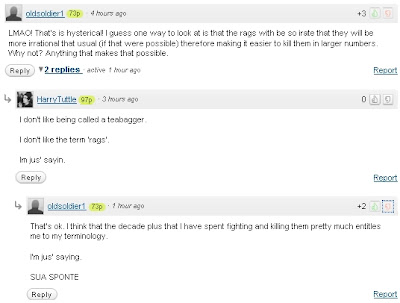 The last statement had me curious - what exactly was the history of America's treatment of gay soldiers - Kayla Webley had written an article for Time earlier this year that did a little explaining:

Though the U.S. military explicitly prohibited homosexuality in the Articles of War of 1916, a ban wasn't enforced until World War II. Amid the largest mobilization in U.S. history, the Army, Navy and Selective Service System developed procedures for spotting and excluding homosexual draftees from service: recruits were screened for feminine body characteristics, effeminacy in dress and manner and a patulous (expanded) rectum. By war's end, more than 4,000 of the 12 million men conscripted for the war effort were rejected for being gay. (Thousands of lesbians were allowed to serve the war effort, however; asking women about their sexuality violated the standards of behavior at the time.) During Vietnam, homosexuality or the appearance of it was seen by some as a way to avoid service in a bloody and unpalatable conflict, although it didn't always work: in 1968 Perry Watkins, a 19-year-old from Washington, was drafted despite checking the "yes" box in the category "homosexual tendencies" during his preinduction physical examination. After 16 years of service, the military discharged Watkins for his sexual orientation in 1984; he promptly filed a lawsuit and went on to win his case in 1990.

In addition to the gay-bashing on Big Government, I couldn't help but notice the couple comments that referred to Muslims as "rags" - what a great bunch of people Breitbart is catering to...
Posted by Kevin at 2:49 AM