How The Tea Party Was Born...

There is an excellent collaborative piece from The Investigative Fund at The Nation Institute that is extremely informative and very enlightening, in which the author, Adele M. Stan, details just who exactly is behind the tea party movement.


Win or lose, the Tea Party movement will come away from next week's elections triumphant, having injected into the Republican Party a group of candidates pledged to the dismantling of government and wed to the religious right. Of the movement's dozen favored candidates for U.S. Senate, all are anti-abortion, and five oppose it even in cases of rape and incest. Among their number are Colorado's Ken Buck, who has compared homosexuality to alcoholism, and Nevada's Sharron Angle, who wants to demolish both the Department of Education and the Environmental Protection Agency. Major GOP players, from political strategist Karl Rove to former Bush speechwriter David Frum, have fretted publicly over Tea Party extremism, with Frum complaining of the movement's "paranoid delusions."

But it has now become clear that these Tea Party "outsiders" are all part of an inside game, a battle for control of the Republican party.

Though billed as a people's movement, the Tea Party wouldn't exist without a gusher of cash from oil billionaire David H. Koch and the vast media empire of Rupert Murdoch. Many of the small donations to Tea Party candidates have been cultivated by either Fox News Channel, a property of Murdoch's News Corporation, or the Americans for Prosperity Foundation, chaired by Koch. The movement's major organizations are all run, not by first-time, mad-as-hell activists, but by former GOP officials or operatives.

Taken together, Americans for Prosperity, FreedomWorks (another far-right political group seeded by the Kochs) and Murdoch's News Corp, owner of Fox News and the Wall Street Journal, form the corporate headquarters of a conglomerate one might call Tea Party, Inc. This is the syndicate that funds the organizing, crafts the messages, and channels the rage of conservative Americans at their falling fortunes into an oppositional force to President Obama and to any government solution to the current economic calamity. Groups such as Tea Party Express, Tea Party Nation, and the FreedomWorks-affiliated Tea Party Patriots; the bevy of political consultants for hire; and various allied elected officials can be understood as Tea Party, Inc.'s loosely affiliated subsidiaries. The Web sites of FreedomWorks, Americans for Prosperity and the Tea Party side projects of Fox News Channel's Glenn Beck are linked with those of Tea Party Express and Tea Party Patriots, all of which in turn solicit support for Tea Party candidates.

I suggest reading the entire article to get a better understanding of all the parties involved.  For a visual, here is a graphic that accompanied the article: 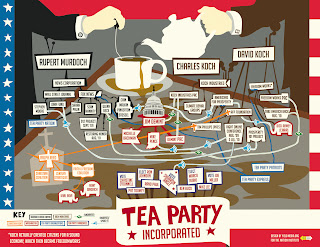