There was an article by Jim Hoft on Big Government that I thought was interesting, in which Hoft states that executive director of the Arab American Action Network, Hatem Abudayyeh, had his home raided in a terrorism investigation and to complicate matters further, Hoft points out that Abudayyeh had visited the White House in April. Hoft also writes that the AAAN was a recipient of almost $500,000 in tax payer money - Hoft implies that the organization is federally financed but the money actually came from city grants from Chicago and was intended to be used to for after-school programs for high-risk students who struggle with English.

Hoft's terrorism article would not be complete without some additional information from right-wing serial-misinformer Debbie Schlussel - Hoft links to Schlussel's propaganda website for the inside scoop on Abudayyeh, where she goes into more detail about the man, but after rattling off a list of bad things associated with the guy, she fails to post any real damning information.  Schlussel only asks the following questions with the assumption that Abudayyeh is guilty (and that is good enough for Hoft to condemn Abudayyeh as a terrorist):


Hatem Abudayyeh and his wife have made trips back to El Jib, the Palestinian Islamic terrorist hotbed. What did they do there? Whom did they see? How much money did they take to Islamic terrorists from the PFLP? Was Saadeh’s surviving terrorist brother involved?

Because Schlussel (and Hoft) don't have the answers, they only assume that he was pallin' around with Hamas terrorists - which is something else I find interesting because as Chuck Goudie from ABC states, federal officers "were looking for funding links between Abudayyeh and the radical Islamic group Hamas that took power in the Gaza Strip three years ago."  If you forgot, President Bush had pushed legislative elections in Palestinian territories, and it was the former administration's actions that had led Hamas to be elected, but because the Bush-backed Fatah party did not win, the world got stuck with Hamas as the ruling government.  Because of the recent history involving Hamas I find these FBI raids interesting.

As a side note, prior to the election in the Palestinian territories, the fundamentalist Hamas was trailing the secular Fatah in the polls yet Hamas wound up winning.  I am reminded of the countless polls done by conservatives that portray a victorious tea party and GOP.

Anyway, Schlussel goes on to write more about Abudayyeh and his alleged wrongdoing:


Maybe conservatives don’t want to admit that Abudayyeh got a ton of money from the Bush administration, a policy which the Obamaniks are simply continuing. Hey, if the “national security/counterterrorism Prez” can do it, why not Obama? Sorry, but I don’t miss Bush yet. And if you do, see a doctor.

Your tax dollars at work. Your money essentially laundered through him to HAMAS, in the guise of English tutoring for illiterate Muslim illegal alien kiddies. Some tutoring probably took place, but as we all know, money is a fungible good, and these grants allowed him to use more money that he, himself, raised for HAMAS via PFLP and FARC.

So, how long until Abudayyeh is indicted . . . assuming the feds have the guts, and that’s a big assumption. They did nothing against this guy I’ve been complaining about since before 9/11. Don’t look for fast action now.

But if they do act, it’s too little, too late. How many innocent people were murdered courtesy of HAMAS funds he helped raise?

There are a couple things of interest with the above article - Schlussel, why kindly mentioning the Bush asministration's involvement with this guy (if there was any), also references the Obama administration giving Abudayyeh money, but as the ABC article indicates, the money received by Abudayyeh were city-level grants.  AAAN may have gotten some federal funding but based on the information presented by Schlussel and her sources, it appears that she is inventing the federal government's involvement (during both administrations).  Also, Schlussel writes as if the money laundering scheme is fact when it is not - for now it is all in Schlussel's head.  This leads me to my second point - Hoft completely ignores the conservative connection (if any) and implies Obama was funneling money to his Islamic radical buddies, and Hoft's readers don't seem to mind.

To point out the hypocrisy, I left a comment that received quite a bit of negative attention from the folks at Big Government:

I decided to give the bloggers and ignorant commenters a taste of their own medicine by linking their messiah, President Ronald Reagan, to the conservative devil, Osama bin Laden.  I had received a whopping -73 debate points (and counting) for that eleven-word comment, as well as a bit of flaming.

Surprisingly, Big Government actually did something about the comment above and removed it from their website, and in record time, too!

I did get some other interesting comments from the folks who consider Hoft a reliable source which I would like to share.  To begin with, here are two comments that are prefect examples of right-wing idiocy:

Did you catch that?  My simple comment must be a "lie or a massive mistake" and apparently Majiic12 thinks Russia was behind Osama bin Laden's rise to power - it is news to me that Russia trained an Islamic army that they were simultaneously fighting in Afghanistan during the eighties.


Another name on Ronald Reagan's roll call is that of Osama bin Laden. The Reagan administration believed it a bully idea to organize an army of Islamic fundamentalists in Afghanistan to fight the Soviet Union. bin Laden became the spiritual leader of this action. Throughout the entirety of Reagan's term, bin Laden and his people were armed, funded and trained by the United States. Reagan helped teach Osama bin Laden the lesson he lives by today, that it is possible to bring a superpower to its knees. bin Laden believes this because he has done it once before, thanks to the dedicated help of Ronald Reagan.

Also, check out these comments that blame Democratic Presidents Jimmy Carter and Bill Clinton (while ignoring Regan and Bush Sr.): 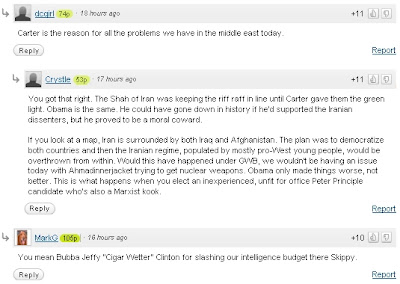 I never realized that the Shah of Iran was doing a bang-up job at keeping bin Laden in check - especially when taking into consideration the problems his government had with Islamic religious leaders, which eventually led to his overthrow.  How can all the blame be placed on Jimmy Carter when it was the Reagan administration that funded bin Laden?

Basically my little comment proved a big point - right-wing propaganda mills and the people that depend on them have little to no understanding of the facts and are glad to operate off of countless assumptions to make their narrative work.
Posted by Kevin at 10:48 AM