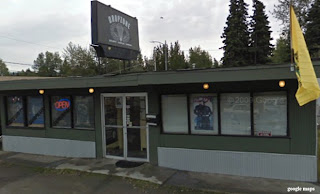 Recently, Alaska Senate candidate Joe Miller got into some trouble when his security detail detained a reporter for asking questions at an event held at a public school.  I had found that story to be very interesting because of the details of the story and how they compared to the various claims made by conservatives - in particular the belief that liberals employ thugs and utilize violent tactics to suppress voters.  I had found that the actions taken by the Joe Miller and his security team more accurately fit that description, and now more details have surfaced surrounding Miller and the extremist militia he has hired to be his bodyguards - Palingates reported on Miller's bodyguards Wednesday, pointing out that Miller has been pallin' around with members of an extremist militia group for some time (with some of the members doubling as his security).


Just two days ago, the security company "Dropzone Security Services", owned by William F. Fulton, came into the national headlines after their members detained AK journalist Tony Hopfinger at a town hall campaign event for Joe Miller. "Dropzone Security Services" were hired as private security for Joe Miller, and they failed to catch the hearts and minds of the nation after embarrassing footage of the "arrest" of Tony Hopfinger surfaced. They came across as unprofessional "goons", and the overzealous actions of William F. Fulton and his team did more harm then "good"

There is more. "Dropzone Security Services" is not just a company run by people who are not very clever, but the company is also right at the heart of the "Alaska Citizens Militia" - a group commanded by Norm Olson, who once rose to "fame" as the founder of the Michigan militia. Part of Norm Olson's history are also contacts to Oklahoma bombers Timothy McVeigh and Terry Nichols, who trained with the Michigian Militia in the past (see here, here and here)

Palingates goes on to detail the history of Miller's security thugs - here is their summary:


Joe Miller chose a security firm for his campaign event which is not only unlicensed, but also right at the heart of an extreme militia group, with the owner of the security firm being a local commander of the militia and also the main supplier. This Alaskan militia is headed by the notorious Norm Olson, who played a major role in the radical militia movement in the 1990's in Michigan, a movement which is at least partly to blame for the Oklahoma bombing.

Miller's hiring of an extremist militia remind me of the Hells Angels running security at the Altamonte Free Concert... 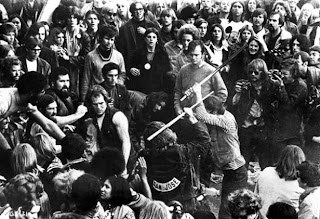 Another enlightening article by the wonderful community over at Palingates...

Also, if you have time, check out Palingates' latest article pointing out how Palin the Patriot violated federal law - The United States Flag Code, or Chapter 1 of Title 4 of the United States Code.  Although that code carries no penalty, I think that article is interesting because it illustrates Palin's hypocrisy - she is the type of person who would criticize her opponent for not wearing a flag pin yet here she is defacing our nation's flag - has Palin ever weighed in on flag burning as political speech?
Posted by Kevin at 1:48 PM