I saw an article by Joseph Weber for The Washington Times that I want to share because I read something interesting in that article.

"They have not a shred of credible evidence to back up those baseless lies," Mr. Rove, deputy chief of staff for President George W. Bush, said on "Fox News Sunday." "How dare the president do this."

It is funny that Rove would make such statements when he is guilty for spreading baseless lies with no shred of credible evidence to back them up - consistently.

Obama wasn't the only person to criticize the Chamber of Commerce - White House senior advisor David Axelrod also spoke out about the group's funding.


White House senior adviser David Axelrod said secret donations to outside political groups are “a threat to our democracy,” singling out the U.S. Chamber of Commerce for criticism less than a month before elections that will determine control of Congress.

“If the Chamber opens up its books,” Axelrod said on CBS’s “Face the Nation” program, “then we’ll know. All we have now is their assertion” that foreign money isn’t used for advertising in U.S. elections.

Axelrod made a very interesting statement - it mirrors the comments made by conservatives against Fox News and conservative pundits in regards to things like the construction of the "Ground Zero Mosque" or unions.  Of course the right pushed back to Axelrod's and Obama's statements - they are a bunch of hypocrites.


Obama criticized Republican-leaning groups at a campaign rally for Maryland Governor Martin O’Malley in Bowie, Maryland, on Oct. 7, saying their advertising is funded by contributors whose identity isn’t known.

“Just this week, we learned that one of the largest groups paying for these ads regularly takes in money from foreign corporations,” Obama said. “So groups that receive foreign money are spending huge sums to influence American elections, and they won’t tell you where the money for their ads comes from.”

Thomas J. Collamore, a chamber vice president, claimed that the accusations are "unfounded and unproven" and that "complies with all applicable laws, and no foreign money is used to finance our political activities, which are only a fraction of the work we do to promote free enterprise in America."

All I have to say to Collamore is put your money where your mouth is - disclose the source of the money they receive.

In addition, here is an advertisement from the DNC attacking the Chamber:


Update -  It has been brought to my attention that a similar article regarding the Chamber was posted on Big Government by their editorial panel (see comments below). There was a comment left by HuskersLoveBo that pointed out the hypocrisy, such as the constant posting by the Big types attacking the Park51 community center, and as can be expected, HuskersLoveBo was targeted by the fans of Big Government.

Here are some of the responses by the right-wing readers of Big Government that can be considered as flames:

You can be certain that these comments will be reported - let's see how quick Big Government is to take them down.  Here is another that illustrates the hypocrisy perfectly - one commenter is bothered that HuskersLoveBo isn't concerned with Shariah law:

There was also a commenter who wrote in defense of HuskersLoveBo.  If you could not guess the outcome, here it is - the Big Government fanatics attacked that person as well:

Some of the posters commented on Obama's campaign finance history, but even then they ignored their hypocrisy.  I found many interesting articles online from conservative sources that attacked the Obama administration for accepting foreign cash - some on Big Government point to a couple American Thinker articles that discusses the purchase of t-shirts by some people in Gaza but those articles fail as well.  One of the articles does mention that the Obama campaign returned the cash, but then they state that they found no evidence of a refund - a "fact" they do not source and quickly move on from.

I found another article I thought was interesting which was from Newmax circa 2008 that discussed the potential for foreign donations to the Obama campaign - their thesis is that the number of donations that are not even numbers mean they are contributions from foreigners, but again, their arguments operate solely off of assumptions.

If you think about it, the right-wing complaint has been the same, whether in regards to Obama's campaign or the Park51 building, but when you notice similarities with their organizations, that is when things are different.  The U.S. Chamber of Commerce is okay because they say they separate funds and we can trust them but the Islamic center must be audited?  That makes no sense - either be consistent or shut up...

Update - I checked back on the Big Government site to follow up on the comment moderation and to my surprise, the comments have been taken down.  The comments by CerealHead, no_more_deceit, and wildbil were removed by an administrator, while the comment by copperpeony just happened to dissappear altogether which leads me to believe that they may be a staffer of Big Government.

I decided to look at some of the past comments of copperpeony just to see what else they had written and here is one comment that pretty much sums up the kind of person copperpeony truly is:

It appears copperpeony believes all black people don't care about he goverment - according to copperpeony, all involvement of blacks in the government was to ensure the election of Barack Obama.

In addition, I just wanted to point this one last comment out. 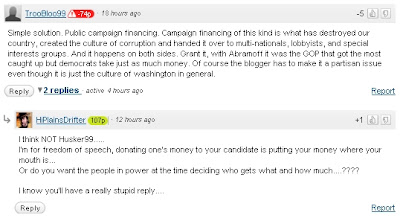 While TrooBloo99 makes a very good comment, and is rather party-neutral, I couldn't help but notice what the Big fanatic called TrooBloo99 - "Husker99."  It seems that HuskersLoveBo really does get under their skin!
Posted by Kevin at 11:59 AM