Just when you thought Delaware senatorial candidate Christine O'Donnell couldn't do anything more ridiculous, she does - After giving a radio interview with WDEL's conservative talk radio program "The Rick Jensen Show," the O'Donnell camp apparently got upset when they discovered the radio interview was video recorded as well.  What was the campaign's response - threaten to sue.

Andrew Malcolm wrote the following for The Los Angeles Times:

After a 20-minute radio interview with an AM station in Wilmington, Del., on Tuesday, a representative of the Republican nominee for Senate demanded that the station turn over a video that had been made of the interview so it could be destroyed.

O'Donnell's campaign manager, Matt Moran, called the station, WDEL, and threatened to "crush" the broadcaster with a lawsuit if the unauthorized video wasn't released to the "tea party" darling, the station reported.


WDEL's attorney told the O'Donnell campaign's law firm that no prior authorization was required to record the interview on video or post it online because the station's actions were protected by the 1st Amendment as free speech, according to a story posted online by WDEL.

"After seeing the video the attorney for the O'Donnell campaign contacted WDEL's counsel again to apologize for charges made by their campaign manager," the station wrote. "The attorney agreed that there was no legal issue with the video and expressed regret for the incident."

"There is no threat to sue D-E-L," O'Donnell's press secretary Doug Satchel told the radio station, on video, Wednesday, apparently putting the matter behind them.


“He accused us of creating a story to garner ratings because we must be hurting since the Phillies were no longer on the air,” WDEL general manager Michael Reath told the Associated Press.  Moran has denied using the word “crush.”

Why is this interesting?  One reason is because Christine O'Donnell claims to be a constitutional expert, yet she threatened the press - the free press - with a lawsuit because they recorded an interview she conducted.

Let's look at the Constitution:


Congress shall make no law respecting an establishment of religion, or prohibiting the free exercise thereof; or abridging the freedom of speech, or of the press; or the right of the people peaceably to assemble, and to petition the Government for a redress of grievances. 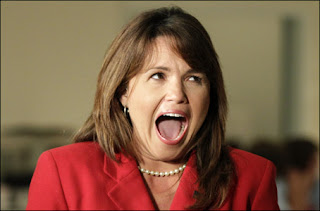 Now consider the reasoning behind the O'Donnell campaign - they wanted the radio station to surrender the video (before they viewed it) because they thought the station was going to manufacture a story against O'Donnell - they obviously were aware of O'Donnell's body language during the interview and how that would be construed - Delware voters may get an opportunity to see the real candidate since the O'Donnell may not have been aware that the cameras were rolling.

When they finally saw the video, they decided to drop the lawsuit - I think they probably dropped the lawsuit because of all the negative press they received over this, considering O'Donnell's hypocrisy of supposedly being a staunch defender of the Constitution yet simultaneously wanting to silence the media.


The station reports it later received an apology from the O’Donnell campaign, and O’Donnell spokesman Doug Sachtleben said in a video interview that there is “no threat to sue DEL.”

WDEL later posted the video on its website, which it routinely does for interview segments.

“There had been a question prior to the interview as to whether or not the video camera would be running, and its my fault for not pursuing that,” Sachtleben said. “The question was never clearly answered, even though it was put to the host twice.”

“We think the video shows Christine to be a strong candidate that went toe to toe with a strong talk show host,” he added.

Why else would the campaign threaten to sue, apologize, and then claim the interview portrayed O'Donnell positively - this is an obvious spin...
Posted by Kevin at 5:19 PM