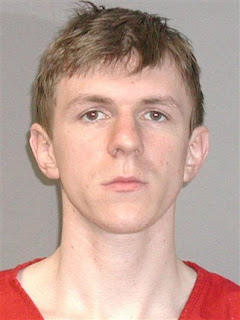 James O'Keefe has done it again.  On Tuesday, O'Keefe had released a video through his Project Veritas and posted a short piece on Big Government attacking his newest target - the New Jersey Education Association.  In his post, O'Keefe claims the union committed voter fraud but admits that the video he made is only circumstantial - he has no hard evidence supporting his accusations and bases everything off a comment made by Wayne Dibofsky, the associate director of the New Jersey Education Association, where he recalled an election nearly fifteen years ago where voting machines were dropped off at the Jersey City Education Association office, but were never used.

Here is the video:

O'Keefe bases his entire video off a comment Dibofsky made where he mentions a couple voting machines dropped off at his office, which was not a voting precinct, and when he told the delivery men of the machines that his office was not a voting precinct and that people would not come and vote, the delivery man replied with the following: "Doesn't matter."  Dibofsky then admits that nobody came to vote on those machines and they were subsequently picked up.

Dibofksy claimed that a candidate had then carried the district with those voting machines - the machines that nobody used.

O'Keefe then goes on to talk about the election and detail the history of the location of the Education Administration to prove that it was indeed not a voting precinct, but O'Keefe only put this information in his video to give it some facts - the rest is just supposition after supposition.

O'Keefe contacted City Clerk of 21 years Robert Byrne, but he could not add anything to O'Keefe's story.

O'Keefe contacted the Superintendent of Elections and they directed O'Keefe to Betty Outlaw, a former Hudson County Superintendent of Elections, whom he could not get in touch with either, but he was sure to mention that she ran for an at-large council seat on Lou Manzo's ticket and that Manzo was indicted - he was charged with extortion last year.  With New Jersey's sweeping corruption arrests last year, O'Keefe was bound to link someone in his "investigation" - much like playing Six Degrees of Kevin Bacon.  Probably doesn't help any that the superintendent's name was Betty Outlaw.

Robert Byrne suggests O'Keefe contact one of the attorneys involved in the election at the time, like Judge Napolitano, to tell O'Keefe that the election was the most scrutinized election in recent history and that what O'Keefe is suggesting would have been near impossible.  O'Keefe does not contact any of the lawyers who were involved in the election, but he does try to contact Dibofsky but he didn't respond in time for O'Keefe's report.

Did you get that?  O'Keefe's "report" on a 13-year-old election could not wait any longer to get any corroborating evidence or actual statements.  Does that sound like journalism or more like a political activist who couldn't find the answer he was looking for so he relies mostly on unprovable allegations.

To sum it up, O'Keefe has no election records, no voting machines, no corroborating witnesses, and no statements from those who were involved in the election at that time.  Basically, O'Keefe has nothing but that doesn't stop Big Government from posting his crap.

After his last stunt trying to seduce a CNN reporter, his hardly news-worthy census video (that quickly fizzled), his arrest for trying to do something with Mary Landrieu's telephone cabinet, and his heavily edited ACORN videos, why should anyone believe this latest video of his?

Update - I had left a comment on the Big Government post pretty much stating my summary but there were no responses - only some negative IntenseDebate scores.  I did, however, notice an interesting comment left behind by another reader, as well as countless attacks by the Big fanatics. 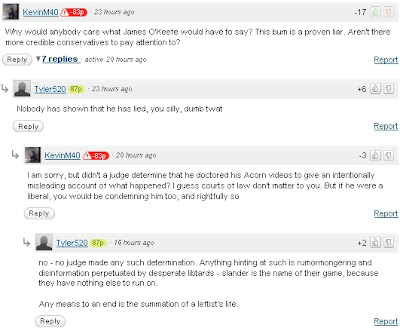 U.S. House Judiciary Chair John Conyers found that "there were no instances of individuals who were allegedly registered to vote improperly by ACORN or its employees and who were reported 'attempting to vote at the polls," and that "no instances were identified in which ACORN 'violated the terms of federal funding in the last five years."


I corrected KevinM40 and Tyler by mentioning Hynes' statements.  Here is what Tyler520 had to say:

Wait a second... Tyler520 insisted that "no judge made any such determination" in regards to O'Keefe's videos but in his repsonse to my comment, he mentions a "punk activist judge."  Considering Tyler520 also mentions "ACORN schools" littering Brooklyn and dozens of verdicts against ACORN still standing without offering any kind of evidence, it is safe to say Tyler knows jack about ACORN, except from what he learns from Andrew Breitbart's propaganda websites.

I am interested to see just what this clown says next, and I thought it would go without saying - I reported Tyler520's "dumb twat" comment.
Posted by Kevin at 3:38 AM