Thought I would just point this fun fact out - according to Blogger's own tracking, The Midnight Review has beat out John Smithson's similarly named right-wing blog, The Midknight Review, in total viewers.

As of the morning of October 1st, 2010, John Smithson's blog received 9,980 hits (since Blogger started keeping statistics back in June).

If you want some proof, here are some screen shots of both this site and Smithsons: 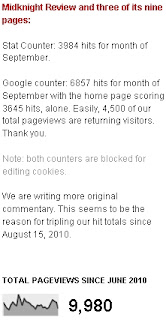 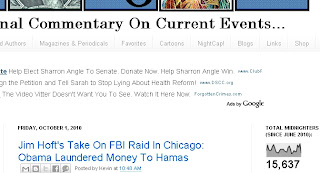 I only wanted to point this out because on Smithson's blog designed to attack this website, he implied that the reason why I would not put a stat counter on this website was because I received less traffic then his and that I would not be able to challenge his numbers if I were to have a stat counter installed.

The following is a screen shot of Smithson's comments (white): 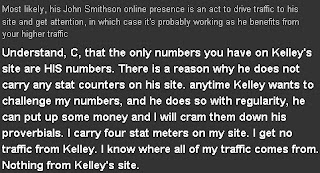 Oh yeah... take a closer look at Smithson's comments from the above screen shot:

Update November 2nd, 2010 - I have decided to check back a month later to see how the site traffic compared using the same stat counter - Google - and the results were astonishing - The Midnight Review beat out Smithson's website with now a 10,000+ lead in visitors!

Here is photographic evidence of the site traffic of both sites: 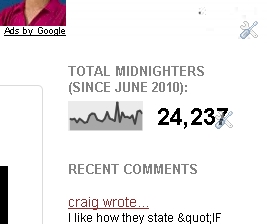 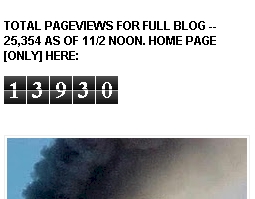 Based on these counters, in the same time period, I have had 8,600 visitors to my site while Smithson had 3,950 - The Midnight Review saw 4,650 more hits per month then Smithson's similarly named site.

I also want to point out another detail - Smithson added a disclaimer to his counter since this article was first posted that now indicates that his site counter only represents the traffic to his main page - total site traffic is considerably more - Smithson places that number at 25,354.  I was under the impression that Google's stat counter was for the entire website, but even if I am wrong, my stat counter on my "home page" is almost that of Smithson's entire website.  Just imagine if I tallied every page...
Posted by Kevin at 3:19 PM