Charlie Crist And The Democrats 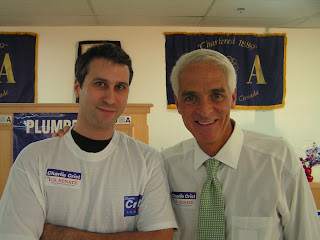 Florida Governor Charlie Crist begun his independent campaign for governor leading the polls, trailed by Republican Marco Rubio and Democrat Kendrick Meek, but things have changed over the months, with Rubio taking the lead and Crist slipping to second.  Recently, a news story claimed Bill Clinton came down to Florida to try and convince Meek to drop out of the race to allow Crist to pick up the Democratic votes - a plan Meek supposedly was for until he changed his mind.

I find this interesting because such a deal would have been the smart thing to do - Meek has no chance of winning and continuing with his campaign would only put Rubio into office - something Democrats would suffer from.  The Crist campaign knew from the beginning that it would never win an election if it went completely to the right and so he campaigned from the center, trying to court voters from both political parties - this is probably why most recently there had been news reports that Crist would caucus with the Democrats should he win.


If elected to the U.S. Senate when voters head to the polls in the Sunshine State next week, Florida Governor Charlie Crist would caucus with Democratic members of the chamber, the Wall Street Journal reports.

According to Florida trial lawyer John Morgan, an advisor to the Republican-turned-independent candidate's campaign, "Crist is going to caucus with the Democrats."

Earlier this year, Crist announced that he would drop his bid for Florida's GOP Senate nomination against party pick Marco Rubio to make an independent run. Following the abrupt party-switch -- which the Senate hopeful earlier denied he would ever considering making -- Crist has made an unmistakable shift leftward in the political spectrum on a host of policy issues.

If Crist can get the Democrats to back his campaign, he will be able to beat Rubio.  Apparently Meek believes he can still win, and the Republicans are sitting back enjoying the show.  Meek even appeared on Fox News' Greta Van Susteren's show "On The Record" to deny rumours that he may abandon his campaign - a move I believe Fox made to try and help keep Meek supporters voting Democrat.  After all, when has Fox News been interested in telling the Democrat's side of the story unless it benefits their agenda - remember Glenn Beck's hour-long interview with disgraced Democrat Eric Massa?

Just consider this - how many times has Kendrick Meek or Charlie Cristappeared on Fox News?  Marco Rubio?


Independent candidate for US Senate Charlie Crist is closing the gap, but is still seven points behind Republican Marco Rubio, according to the latest Quinnipiac Poll.

The survey shows Rubio getting 42 percent of the vote, Crist with 35 and Democrat Kendrick Meek with 15 percent. Quinnipiac Pollster Peter Brown says Crist is stealing votes from Meek.

“Obviously the fewer people who vote for Kendrick Meek the better off Crist is in the senate race. The question is, can he move enough people from Meek to himself to overtake Rubio. That’s a tall order with a handful of days left in the campaign,” said Brown.

Considering the margin of error, that places Crist neck and neck with Rubio.  I suspect Democrats will be watching the poll results on election day and may pull to Crist in the last minute...
Posted by Kevin at 10:33 AM