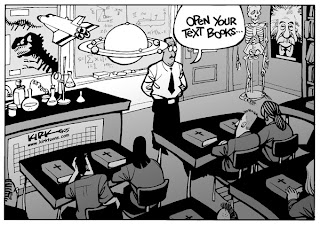 I saw an article on Reuters by Parisa Hafezi, regarding Iranian academics, that reminded me of another story recently - the right-wing takeover of the Texas board of education.


"Expansion of 12 disciplines in the social sciences like law, women's studies, human rights, management, sociology, philosophy....psychology and political sciences will be reviewed," [Education Ministry] Abolfazl Hassani was quoted as saying in the Arman newspaper.

"These sciences' contents are based on Western culture. The review will be the intention of making them compatible with Islamic teachings."

Hassani said Iranian universities will not be allowed to open new departments in these disciplines and the curricula for existing departments would be revised.

Iran's hard-line rulers accuse the West of trying to harm the Islamic state by influencing the country's young generation with "decadent" culture.

The comments from the senior Education Ministry sound remarkably like the changes made by the conservative Texas board of education.

The board has amended or watered down the teaching of the civil rights movement, slavery, America’s relationship with the United Nations and hundreds of other items.

Some of the changes include:

b) Questions the discussion of separation of church and state.

c) Claims that the U.S. government was infiltrated by Communists during the Cold War.

e) Eliminating hip-hop should as part of lessons on American culture.

f) Rejected language to modernize the classification of historic periods to B.C.E. and C.E. from the traditional B.C. and A.D.

The Texas Education Agency stated the following will be added to the Government curriculum standards:

“Examine the reasons the Founding Fathers protected religious freedom in America and guaranteed its free exercise by saying that Congress shall make no law respecting an establishment of religion or prohibiting the free exercise thereof, and compare and contrast this to the phrase “separation of church and state.”

The changes from Texas' school board sound like something Iran's culture ministry would do - just change the subjects to their Iranian equivalents.

It seems fundamentalism transcends faiths...
Posted by Kevin at 2:57 AM