In the Delaware senate debate on Wednesday night, tea party favorite Christine O'Donnell, who is not a witch, repeated the same mistake her mentor Sarah Palin made two years ago by being unable to answer a simple question - name a recent Supreme Court decision that she disagreed with.


NANCY KARIBJANIAN: What opinions, of late, that have come from our high court, do you most object to?

KARIBJANIAN: Actually, I can't, because I need you to tell me which ones you object to.

O'DONNELL: Um, I'm very sorry, right off the top of my head, I know that there are a lot, but I'll put it up on my website, I promise you.

WOLF BLITZER: We know that you disagree with Roe v. Wade.

O'DONNELL: Yeah, but she said a recent one.

BLITZER: But since then, have there been any other Supreme Court decisions?

O'DONNELL: Well, let me say about Roe v. Wade -- If that were overturned, would not make abortion illegal in the United States, it would put the power back to the states.

BLITZER: But besides that decision, anything else you disagree with?

O'DONNELL: Oh, there are several when it comes to pornography, when it comes to court decisions -- not to Supreme Court, but federal court decisions to give terrorists Mirandize rights. There are a lot of things I believe -- This California decision to overturn Don't Ask, Don't Tell. I believe there are a lot of federal judges legislating from the bench.

BLITZER: That wasn't the Supreme Court. That was a lower --

O'DONNELL: That was a federal judge. That's what I said. In California. 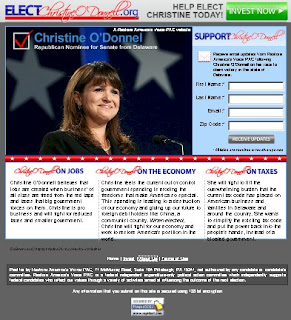 O'Donnell should be proud that she got this far- Palin couldn't answer what magazines she read.

To be fair, it may be difficult to name a supreme court case one disagrees with - thinking off the top of my head right now, I can only think of a couple - but, O'Donnell was in a debate and should have been prepared for such questions, especially considering Republican complaints about judicial activism.  O'Donnell couldn't even muster up a decent response, like claiming the supreme court doesn't have any activist judges - a statement she could have feasably made since the high court leans to the right and as we all know, only liberals are activists.

O'Donnell did promise to put the court cases she disagrees with online, and I know its early so I won't fault her for her lack of updating her campaign's website, but I wonder something - where would O'Donnell place that information on her website?

Her website is pretty much a single page with only three positions O'Donnell stands for - jobs, the economy, and taxes.  I thought O'Donnell was hiring more staffers to take care of her shabby campaign.
Posted by Kevin at 11:06 PM