Here is what the ballot for Florida's senator will look like in November: 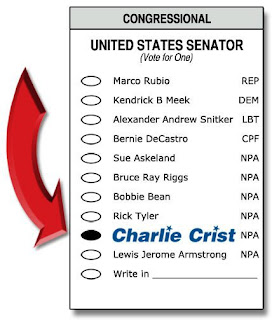 Steve Bousquet for the Miami Herald explains why:


Under state law in general elections, partisan candidates are listed first, starting with the candidate of the party controlling the governor's office. That puts Republican Marco Rubio at the top of the Senate ballot, followed by Democrat Kendrick Meek. (Crist was a Republican when he was elected governor in 2006, so he contributed to Rubio's name being listed first.)

By law, minor party candidates are next: in this case, Libertarian Alexander Snitker followed by Bernie DeCastro of the Constitution Party of Florida.

No-party candidates are listed in the order in which they filed their official papers -- not alphabetically. So it's Sue Askeland, Bruce Ray Riggs, Bobbie Bean, Tyler, Crist and Armstrong.

In my opinion, all elections should require a randomized ballot to provide for a more equal opportunity on the ballot. Bousquet writes that "a 2005 study of 'ballot order effect' by the California Institute of Technology found 'little systematic evidence' that being listed first helped a candidate" - other studies indicate that the benefit is minimal, especially when party affiliation is listed.

A study by the University of Vermont showed that appearing first on the ballot gave candidates a minor edge, with candidates receiving "two-and-half percent more of the vote than those listed after," with even bigger disparities seen "when the party affiliations were not listed, races were minimally publicized, or there was no incumbent running in the election."

A similar study conducted on the 24-year history of the California Alphabet Lottery also indicated that being placed first saw a difference of one to three percentage points.

Taking into consideration the population of Florida, which hovers around 19 million, a couple percentage points could result in hundreds of thousands of votes going towards the person topping the list.

Even if you hold the opinion that ballot order plays no significant role in elections, then what is the harm in randomizing candidate placement?  I think voting laws should go one step further and only list the name of the candidate and the position they are running for.  Much to often an unqaulified candidate is elevated due to party affiliation - the teabaggers should love that policy change because it would somewhat embrace the philosophies of founding father George Washington, who espoused in his farewell address the need to avoid party establishment...
Posted by Kevin at 10:48 AM