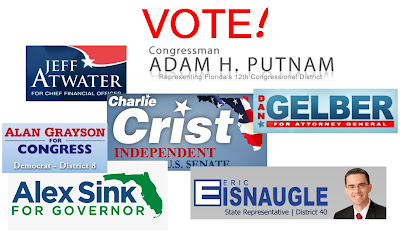 Go out and vote before it's too late - I spent this morning casting my ballot.  Here are the list of candidates that got my support:
Here are my choices for the proposed constitutional amendments (here is an excellent analysis):
I also voted "No" on both non-binding referendums on the ballot.

Below are my explanations as to why I voted the way that I did - independetly of both major parties (please note that the reasoning listed below is not the full reason for my decisions but a compact reasoning).

Anyone as corrupt as Rick Scott does not deserve to be anywhere near government. 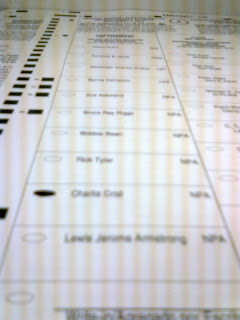 Marco Rubio is backed by the Tea Party.  Enough said.

Alan Grayson has proven to be an advocate for Central Florida - Daniel Webster aims to represent a minority.

A Republican for Attorney General?  Just look how good Bill McCollum did in office, wasting money for anti-gay experts and lawsuits against "Obamacare."

While Adam Putnam may campaign using teabag rhetoric, I felt that he was more qualified for the position and his politics would not negatively impact Florida.

I have had experience with Eisnaugle's office and found them to be very helpful.  I am supportive of Eisnaugle's accomplishments since he was elected two years ago - I did not vote for him then.  Eisnaugle also does not have any of the extreme right wing talking points on his website, which is a good sign - he has proven to be a moderate.

Jeff Atwater seems pretty standard for a CFO, but like Eisnaugle, I have not heard anything alarming - my teabag radar did not go off.


Here are the amendments: 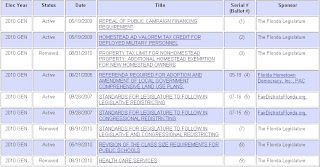 I was conflicted with Amendment 1 but decided to vote for the repeal.


Amendment 2 sounds very nice - give deployed military personel an extra tax exemption - but if you consider some of those deployed individuals receive extra money for their deployment, coupled with the fact that their property may be inhabited by a spouse or another individual while they are deployed, this tax break seems unnecessary and will only hurt local governments.


I voted for Amendment 4 because of the rampant growth Florida experienced and the greed municipal officials exhibited by permitting such growth for the promise of increased tax revenues.  While many business organizations were against this measure, I thought it was important to reign in expansion - if this ammendment proves to be a bad idea, then I would agree in a repeal.

Amendments 5 and 6 were perhaps the most important.  Consider the fact that registered Democrats outnumber Republicans but the congressional delegation is two-thirds Republican and the Legislature is overwhelmingly controlled by the GOP - it is time that the state's representation actually represents the population.

Amendment 8 is another given - while the original class size amendment sounded fine, limiting class sizes in order to improve the quality of education, it not only placed a tremendous burden on municipal government, it also did not address the real problem with Florida's failing education system.  I did not think this amendment went far enough but I believe it is a start.

Here is the full text of one of the two referendums (for some reason I cannot find the other):


In order to stop the uncontrolled growthof our national debt and prevent excessive borrowing by the Federal Government, which threatens our economy and national security, should the United States Constitution be amended to require a balanced federal budget without raising taxes.

This rerferendum sounds as if it were written by a tea party.  While I support a balanced budget requirement, I believe the stipulation that taxes may not be raised is dangerous and would seriously limit the federal government from performing its functions.  Consider the discussion about extending the Bush tax cuts - conservatives will want to extend the tax cuts in full, forcing the government to cut billions in spending, possibly from some much needed areas.  While I agree some federal expenditures are wasteful, some are also quite necessary, and considering the right's unwillingness to touch defense spending, cuts would most likely be made on things like social security or medicare (which are things conservatives claim to protect)...