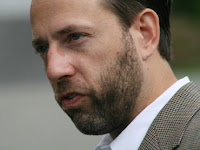 I thought this was interesting - Alaska tea party candidate Joe Miller has announced that he will no longer answer questions regarding his personal life because of allegations made by Miller that there was a confidentiality breach of his personal record files from when he served as a government attorney.


Alaska U.S. Senate hopeful Joe Miller said Monday he will no longer answer reporters' questions about his background and personal life, following what he called a leak of his personnel record from when he served as a government attorney.

Miller offered no proof of this during a brief news conference in Anchorage, saying only that he'd learned over the weekend that members of the media had gained access to his confidential file from his work with the Fairbanks North Star Borough.

An assistant borough attorney, Jill Dolan, said Monday that she did not know of any confidentiality breach. An attorney for Miller didn't return a message.

Miller called it the "latest political attack" against him and his family, and an effort to divert attention from the real issues of the race.

Sounds as if Joe Miller is inventing a reason to not answer for any of his hypocrisies.  The only mention I could find regarding personal information being leaked was a two month old article from the Fairbanks Daily News-Miner by Chris Freiberg, in which campaign spokesman Randy DeSoto claimed the borough had leaked information to the press and hired an attorney to fend off any challenges - a claim the borough denies.

It is interesting that the borough denied any leakage two months ago and they deny any leakage a couple days ago.  Maybe that is because there probably was no leakage - Miller probably doesn't want people looking into his background to see if he is qualified to run for office, which leads me to my second point.

Joe Miller attacks the media for questioning his questionable past but he has no problem attacking others.  I am talking about in particular his recent refusal to answer questions about his queen bee - Sarah Palin.  During a Fox News interview, when Miller was asked if Palin was qualified to be president, he basically avoided the question saying she met the requirements set forth in the Constitution.  Was this a subtle reference to the "birther" conspiracy?  Birthers seem to think so.

According to Orly Taitz's website, a "dogwhistle" went off.


It takes a great deal of talent for a politician to combine a dogwhistle to birthers and a veiled insult to Sarah Palin in just a few sentences. But Alaska Senate hopeful Joe Miller (R) managed to do just that.

In a Fox News interview, Miller could barely bring himself to say he thinks Sarah Palin is qualified to be President of the United States. When he finally did, though, all he could muster was the fact that she clears the lowest hurdle, meeting the benchmarks the Constitution requires of U.S. Presidents.

“Let me make this unequivocal,” Miller said, after jousting with the Fox host for several rounds. “She’s done phenomenal things for this country, there’s no question about that. She’s elevated the debate, critical to our race, and let me tell you also, we know what qualified means, don’t we? We know that we have a constitutional requirement for somebody that’s gonna run for President. Of course she’s qualified.

Those Constitutional qualifications? Be at least 35 years old, and (wait for it) be a natural born citizen! People from Kenya need not apply.

David Neiwert made similar observations on Crooks and Liars:


Well, Todd issued a statement saying he had just misunderstood Miller, but really, there's no misunderstanding this: Joe Miller refuses to endorse Palin as a presidential candidate.

Can't imagine he'll be pleased with a mere endorsement of her bare constitutional qualifications, since everyone running meets them -- everyone, it seems, but certain Kenyan-born Muslims.

Because that seems to be what Miller is referencing by emphasizing "we have a constitutional requirement for somebody that's gonna run for President". Earlier, Miller was emphatic that the current occupant of the Oval Office is unqualified.

It sure sounds like Miller is a believer in the Birther theories. It's about time someone asked Miller about this. If, that is, he'll let them.

So what I am trying to get at is the hypocrisy of Miller not wanting to take any more questions about his personal life but willingness to imply other politician's lives are fair game.  If you think the birther connection is a bit of a stretch, how about Joe Miller's involvement in trying to block the Alaskan legislature for investigating further into Palin's Troopergate probe - the political scandal involving Palin trying using her position of power to remove Commissioner of Public Safety Walt Monegan from office because he refused to end the career of her sister's ex-husband, Mike Wooten.

Miller, who has campaigned against corruption, was actively involved in protecting corruption, and what makes this more interesting is that he was trying to protect the one person that made the most impact on his senate campaign - Sarah Palin.  Was Palin returning a political favor by endorsing Miller?

You could try to ask Miller about his involvement in trying to cover up the Troopergate scandal, and you would think he would answer it because it doesn't involve his personal life, but good luck - the Miller campaign has decided to ignore all inquiries into this matter...
Posted by Kevin at 9:52 AM